Innovation Talk: In the cult of the start-up, inequality gets short shrift 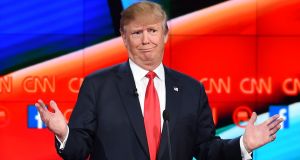 It is clearly not just the likes of Donald Trump (above) and Paul Graham who are never told they are completely wrong; the same could also be said of entire industries, from Wall Street to Silicon Valley. Photograph: Robyn Beck/AFP/Getty Images

I was reading an article about Donald Trump recently – he’s hard to avoid these days – and one line really stood out: “One of the more dangerous pleasures of great wealth is that you never have to hear anyone tell you that you are completely wrong.”

The line, by conservative commentator David Frum in the Atlantic, is a good one. And while it has been pointed out about many extremely rich and powerful people in the past, of course, it rings particularly true in the case of Trump.

I had cause to think of it in a different context last week when I read an essay by influential Silicon Valley “thought leader” Paul Graham.

Graham is the English programmer who made millions selling his company Viaweb to Yahoo back in the 1990s and went on to co-found the hugely successful Silicon Valley start-up incubator Y Combinator. He is often lauded as one of Silicon Valley’s smartest men, and last week he turned his mind to the complex issue of economic inequality and the role of start-ups therein.

“So when I hear people saying that economic inequality is bad and should be decreased, I feel rather like a wild animal overhearing a conversation between hunters. But the thing that strikes me most about the conversations I overhear is how confused they are.”

Perhaps Graham should start eavesdropping on a better standard of conversation. He goes on to make some woefully unconvincing straw-man arguments and relies on remarkably sloppy logic to do so. You could call it sophistry, but that might be giving it too much credit.

The essay is not without its good points, particularly on how technology enables efficiencies that can lead to inequitable economic outcomes. But Graham barely mentions taxes, fairness or social welfare, and doesn’t seem to grasp the difference between wealth and income inequality.

He certainly didn’t seem to overhear Thomas Piketty’s Capital in the Twenty-First Century, much less read it – Piketty’s famous “r >g” equation describes how the rate of return on capital is generally higher than the rate of economic growth, and thus how inherited wealth is a principal driver of economic inequality. Start-ups, not so much.

Inevitably, the essay has been gleefully critiqued and dissected by many online, held up as a perfectly representative example of Silicon Valley entitlement and solipsism. At Quartz, sociologist Holly Wood delivered one of the most scathing takedowns: “I find it laughable that Paul Graham thinks start-up cultists like him should be excused from our scrutiny of the inequality engine.”

Only room for one

Critically, I think it’s important to recognise the linguistic sleight of hand that his argument rests on. “You can’t prevent great variations in wealth without preventing people from getting rich, and you can’t do that without preventing them from starting start-ups,” he writes. “So let’s be clear about that. Eliminating great variations in wealth would mean eliminating start-ups.”

Once that point is made, the absurdity of Graham’s position becomes clear, because nobody, anywhere, argues that the way to end economic inequality is to stop businesses or the creation of new businesses. Instead, the essay stands exposed as a rather flimsy defence of the sort of money-obsessed start-up culture that Graham represents.

With this self-exculpatory essay, the author offers us the epitome of Silicon Valley exceptionalism, in which language itself gets “innovated” and meaning gets “disrupted”, until it serves only to reinforce his worldview.

Perhaps the most worrying aspect of the essay is that Graham thanks numerous Silicon Valley insiders for their feedback on earlier drafts , and he still published it.

Which brings us back to Frum’s line about the dangerous pleasures of great wealth. It is clearly not just the likes of Donald Trump and Paul Graham who are never told they are completely wrong; the same could also be said of entire industries, from Wall Street to Silicon Valley.

We should all be deeply concerned by what that might mean for the rest of us.

1 My aunt never told us that Gran passed away with no will
2 Ryanair and Aer Lingus cut flights as travel restrictions continue
3 Political row brewing if Ireland loses its appeal on Apple
4 Ireland’s age of retirement must be pushed out, watchdog warns
5 Will Revenue come calling with tax bill if inheritance tax threshold falls?
6 Dublin banker sells island off coast of west Cork for €5.5m
7 The $6bn judgment pitting Nigeria against Irish businessmen
8 If it’s safe to do so, could this be the time to spend for Ireland?
9 Republic risks becoming ‘Europe’s North Korea’ on air travel, says Aercap chief
10 UK to purge Huawei from 5G by 2027, angering China
Real news has value SUBSCRIBE