Congress leader to step down in March 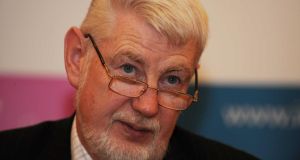 The general secretary of the Irish Congress of Trade Unions David Begg is to retire.

Mr Begg told the executive council of Congress today that he would be stepping down from his post next March.

He has held the position of general secretary of Congress, the umbrella body for the trade union movement in Ireland, since 2001.

Mr Begg was chief executive of the charity Concern Worldwide from 1997 to 2001.

He previously served as general secretary of the Communications Workers’ Union and as head of the ESBOA.

Mr Begg also formerly served as governor of the Irish Times Trust and as a director of the Central Bank.

He is a member of the National Economic and Social Council (NESC) and a non-executive director of Aer Lingus.

The Congress executive is now expected to put in place a plan to recruit a successor to Mr Begg as general secretary in advance of his departure in March.

Mr Begg’s retirement is not unexpected. He told the biennial conference of the Irish Congress of Trade Unions in Belfast in 2013 that he would not be in the post by the time it held its next conference next summer.

1 Up or down – how much is your Local Property Tax this year?
2 PTSB sells €1.4bn of buy-to-let mortgages to Citigroup
3 Am I crazy to consider switching to an Ulster Bank mortgage?
4 How much state pension will I get next year?
5 Brexit to curb services trade with UK, accountants group warns
6 CRH sells Brazilian cement business for $218m
7 Mortgage drawdowns fall by almost a third compared to 2019
8 Profit down 12% at Newry-based First Derivatives
9 Oxford Covid vaccine trials offer hope for elderly
10 Ghost newspapers and zombie brands are stalking the media
Real news has value SUBSCRIBE