By mastering the art of creating hit apps, Gaston Irigoyen earned a place on Forbes list of 35 under-35 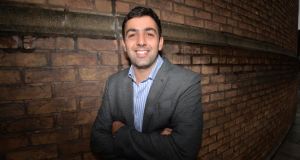 Gaston Irigoyen: “Our goal is to help people transition from hobbyists to professionals. We want to give them the resources to transform their hobby into a business.” PHOTOGRAPH: ALAN BETSON

Gaston Irigoyen was one of Google’s first five employees in Argentina – although he very nearly didn’t end up working for the internet search giant. When Google emailed him about the job, the email went into his spam folder.

The founder of Dublin-based start-up Guidecentral, Irigoyen studied international relations at college in Buenos Aires. It was at a jobs fair at college that he first saw a flyer advertising positions in Google. He emailed the tech company applying for a job. “They emailed me back but the email went into my spam folder. By chance I checked,” he says.

Irigoyen then underwent a gruelling seven interviews with the company, four of which were in person.

“I heard nothing from them for several weeks so I accepted a job with Accenture. I was meant to start Accenture on the Monday and late the previous Friday, I got a call from Google offering me a job. By that stage, it was too late to call Accenture.”

Google rented office space from Regus in Buenos Aires and it was there that Irigoyen and his four co-workers began rolling out programmes such as Google adwords throughout Latin America.

With the team rapidly expanding, Google soon took over an entire floor in the building and requested permission from Regus to knock the walls and create an open space.

“They [Regus] are business lounges and have offices around the world. It was a typical corporate building. We eventually took over an entire floor of the building and wanted to take down the walls so the space was more in line with Google’s culture. Regus couldn’t understand why we wanted to do it and charged us a lot of money.”

Google eventually got its own building in the rejuvenated port district of Puerto Madero in Buenos Aires, an area which Irigoyen says has a similar story to Grand Canal Dock, having once being a thriving docklands area but falling into ruin. Google took up residence in a building which was once used to store grain for export.

“Like Grand Canal Dock, it was an abandoned area. Now it is cool and trendy and home to a large number of tech companies such as Facebook and Microsoft.”

Lehman Brothers had collapsed, the entire world was in a global financial crisis and even Google had been hit. The search company was laying off workers and had closed its Melbourne office.

However, in October 2009 he finally got the chance and moved to Ireland with his wife. He says Dublin could not have been a better place as she was able to take a position with Procter & Gamble, the company for which she had already been working.

Not long after landing in Ireland, it started filtering down from senior Google management in the US that mobile was the next big thing.

Irigoyen and his co-worker Marco Hernansanz decided to create a mobile app. It was a time when apps were still very new.

“Marco’s friend, Israel San José González, is a developer and he came on board to help. He is now the CTO of Guidecentral.”

It was 2010 and, with the Fifa World Cup approaching in South Africa, the three decided to create a soccer app, detailing the teams and stadiums for the World Cup and allowing users to make predictions on top scorers and which team would win. Within two days the app was in the top five of the Apple app store charts in numerous countries.

At the time, Irigoyen was working as a senior sales executive at Google’s EMEA (Europe, the Middle East and Africa) headquarters, but seeing his entrepreneurial spirit with regard to the app, he was promoted to partnerships manager at YouTube.

“The goal was to roll out the YouTube partners programme for Europe. We worked with the top content creators – the people who made the most-watched videos. We helped them develop their presence on YouTube and ultimately make money from YouTube.”

In March 2012, he left Google to set up his own business, Guidecentral.

The website and mobile app offers “how-to” guides from food recipes and beauty tips to lifehacks and home repairs. The app, which landed Irigoyen a place on the Forbes 35 under-35 list this year, has 100,000 active monthly users.

The start-up is based out of Dogpatch Labs, a few doors down from Google on Barrow Street. Irigoyen got an initial investment from a Google executive, as well as Buenos Aires-based accelerator NXTP Labs, to fund the business.

At the end of 2012, he went out to Argentina where he did a roadshow promoting Guidecentral and meeting with investors.

“I secured investment from nine different investors in Argentina. Enterprise Ireland invested in us as a result. They could see we were creating jobs and bringing money into the country.”

He says the next step is to help hobbyists develop their business and to introduce maker kits.

“Our goal is to help people transition from hobbyists to professionals. We want to give them the resources to transform their hobby into a business.

“We are going to start delivering DIY kits with a subscription model. You will receive a box to your home every month with tools and supplies to make projects on our app.”