Home from school at 1am in South Korea where education rules 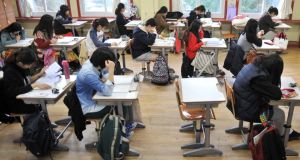 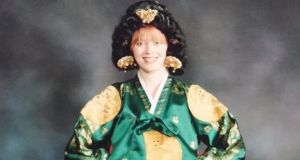 Shauna Browne, from Roscrea, who teaches in South Korea

The sight of secondary school students in blue uniforms traipsing through downtown Seoul at 11pm is jarring, but it’s common in the highly competitive South Korea.

The youngsters are on their way home from the hagwons, the country’s private, after-school tutoring academies.

Education is an obsession in South Korea and it’s been one of the deciding factors in the country’s economic advance since the 1950-1953 Korean War which left the economy in ruins.

From being among the poorest countries in the world, South Korea is now richer than the European Union average.

The fact that South Koreans are hardworking is no mere cliché – they average 2,200 hours of work a year, half as much again as the Dutch or Germans, and the hours they work are productive because of the highly technological society.

This hard-working reputation is copper-fastened at schools, especially at the hagwons. The after-school education market is worth about €12.5 billion a year, and South Korea is now the second best performing country in the Pisa global test of academic excellence.

Shauna Browne, from Roscrea, came to Korea in 2007 for a three-week summer programme in Chung Ang University in Seoul. She has been teaching in Korea since 2009.

“In Korea, education is a top priority from day one. Parents are generally willing to do whatever it takes to make sure their children get the top grades and eventually get into a top university in Korea,” said Browne, who also chairs the Korean Irish Association.

A typical student’s day is exhausting to contemplate, with 14-hours in class not unusual.

There are mandatory after-school classes, which run late into the evening. Then comes hagwon private tuition, which goes on for hours after school, enough for the government to introduce a law forbidding after-school grinds after 10pm.

Even then many crammers avoid this rule, and it is not unusual for children to get home at midnight or 1am.

There are also an increasing number of boarding schools, which are basically just regular schools with a place for exhausted students to crash out in after a day of intensive study.

The ultimate goal in Korea is to attend one of the “Sky” universities – Seoul National University, Korea University, Yonsei University – or to go to a top university, including Ivy League in the US, overseas.

Barry Eustace, who has been teaching in Korea since 2002 and represents Dublin City University language services in Korea, says Koreans are dedicated not just to educating their children, but also making sure they do better than the child next door.

“It is extremely competitive with children attending extra, private classes from a very young age, even pre-school,” said Eustace.

Korean families will often spend up to half of their total income on private tuition, as it is seen as a springboard to success.

The share of private sources for education is still much higher than elsewhere, around 48 per cent in 2010, nearly three times higher than the OECD average.

“The sole focus of parents is to educate their children to get into the top universities and they spend a significant proportion of their income to achieve this, even moving into areas such as Kangnam or Mokdong from elsewhere as schooling, and the ‘level/class’ of student, are said to be superior in these areas,” said Eustace, who is from Tallaght, and whose daughter is half-Korean.

“This then inflates the price of housing in these areas and private education costs are inflated here too, resulting in more and more of a family’s income being spent educating their children,” he said.

Between 2005 and 2010 the amount spent on education increased by a staggering 39 per cent, chiefly from private sources.

“The harder I work, the more I make,” is his mantra, and the Porsche-driving tutor has taught around 1.2 million students, and he even made a pop song to help soothe the nerves of potential students called Trust Me.

The late-night cramming starts when exams come around in middle and high school. In order to try to stop parents spending too much money on their children at this age, public schools stay open, and have study periods, until late in the evening in order to provide “free” areas to study in.

Browne teaches English to Korean children aged between three and seven years (which, because of their different calendar, is two years to six years of age in Western years). Once the children reach the age of six, they start attending a hagwon academy.

“This drives both the level and the competition in the class, so by seven they are competing for top scores in an exam that the parents have encouraged us to do with the children,” said Browne.

By the time children go to elementary school, the hours spent in different hagwons increase and escalate until they reach high school where their day is just spent studying.

“Everything you read about Koreans being obsessed with education is accurate. After school, students spend their time in a series of hagwons or with private tutors with little or no free time for play,” she said.

Despite the amount spent on education, especially on learning English, there are strong anomalies.

While a good result in your English test is essential to get a good job, you will be hard-pushed to find good English proficiency in South Korea, and the level of spoken English is much lower than in other parts of Asia.

“Wherever you go in Korea, can people speak English? Normally, not,” Kim Ki-hoon said in a recent interview. “But all Korean students have been learning English for over 10 years.”

Kim blames the system of testing English. English is tested using multiple choice comprehension exams, such as the Test of English for International Communication.

There are efforts afoot to try and boost the public-sector component in education in Korea.

The introduction of a financial support programme in South Korea, that provided tuition fees for all five-year-olds in 2012, and the extension of this programme to three- and four-year-olds in 2013, is expected to lead to a steady increase in the proportion of total expenditure from public sources over the coming years.

This is paying off slowly, and the share of public sources for early childhood education increased from 43 per cent in 2009 to 53 per cent in 2010, the Organisation for Economic Co-operation and Development (OECD) says, but education is still very much seen as the family’s responsibility.

It’s not just the teachers in the hagwons who are well paid. In 2011, in lower and upper secondary schools, teachers with 15 years of experience and minimum training, earned €35,382, compared to the OECD average of €29,347 for lower secondary and €30,620 for upper secondary teachers.

Korean mothers will often move with their children to the United States to further their education, leaving the father behind, a “lonely goose”, to earn a living.

In some cases, families will move to lesser-known states in America such as Omaha city in Nebraska to capitalise on Ivy League quota systems which favour certain states.

This highly competitive market does offer opportunities too, for Irish graduates keen to work in Korea.

Teachers coming from overseas earn on average around 2.2 million won (€1,600) a month, with free accommodation and flights home.

“It is a very lucrative deal for foreign teachers. The cost of living here is low and there is a large expat community, so life is very comfortable,” said Browne.

Ireland is behind the curve in attracting students from Korea, and the lack of a direct flights makes it a difficult option for younger students, but there are signs that attitudes are changing, with three ministerial visits to Korea so far this year.

The Philippines is more competitive as a destination for English study, as it cheaper. However, Irish universities have established partnerships in Korea.

“Ireland can really sell itself as a stepping stone to Europe as Europe is very much in vogue here.

“Currently we have 40 university students at DCU for a one-month English language course and will welcome another group in September for the autumn semester,” said Eustace.