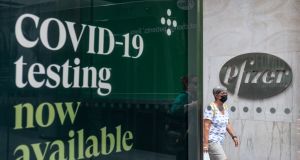 A pedestrian wearing a protective mask passing in front of a sign outside Pfizer headquarters in New York.

The chief executive of Pfizer has warned about the reputational risks of fast-tracking a Covid-19 vaccine, as governments put pressure on pharmaceutical companies to deliver an inoculation to bring the pandemic to an end.

Albert Bourla said the US drugmaker would never submit any vaccine for authorisation before it felt it was safe and effective.

“Pfizer last year had its 170th anniversary. It’s a long institution and I don’t plan to reduce its reputation in a year or two,” he said.

Mr Bourla said he understood that people may be “sceptical” about vaccines. “They are sceptical because there’s so much politicised science right now,” he said in a press conference of the International Federation of Pharmaceutical Manufacturers and Associations. “This is the worst situation for society.”

His comments come as the US government appears to be preparing to distribute a vaccine ahead of the presidential election in November.

The head of the US Food and Drug Administration told the Financial Times that he is willing to fastback a vaccine, but will not do so at president Trump’s request. The director of the US Centers for Disease Control and Prevention has also written to states asking them to speed up approval for vaccine distribution sites to have them ready by November 1st.

Pfizer is at the phase III stage of trialling a vaccine candidate developed in conjunction with its German partner BioNTech.

This involves a large number of participants and an unvaccinated control group. It has already enrolled 23,000 of 30,000 participants but the speed at which trial results become clear will depend on how many in the control group become infected and when this happens.

Mr Bourla expressed his concerns as BIO, the US biotech association, wrote a letter to the industry calling for data transparency and warning that various parts of the population may react differently to a vaccine and those differences will only be revealed in “larger, longer-term studies”.

BIO also called on the FDA to maintain its “historic independence” and political considerations to be put aside “by Republicans and Democrats alike”.

Ken Frazier, Merck’s chief executive, told the conference it was unfortunate that institutions had suffered a loss of trust. “It is important for our industry to restate our commitment to first do no harm,” he said.

Anthony Fauci, a top doctor on the White House’s coronavirus taskforce, told CNN on Thursday “we can have some confidence and faith” in the FDA assurances that it will make the decision based on scientific data. “We hope that is going to be the case,” he added.

If the vaccine is proven “safe and effective”, he said: “I would not hesitate for a moment to take the vaccine myself and recommend it for my family.” – Copyright The Financial Times Limited 2020