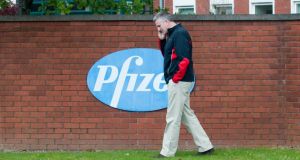 Pfizer will lose its Little Island manufacturing plant in Cork in the latest phase of restructuring by the company of its Irish operations.

The US pharmaceutical giant has blamed falling demand for key products following the expiry of patents for the move.

The company is moving production from Little Island to its nearby Ringaskiddy plant and says it expects to make the transition next year.

Pfizer employs 136 people at Little Island. The company said today that none of its other Irish sites is affected by the consolidation of its active-ingredient manufacturing operations.

“Pfizer has been reviewing its global manufacturing network and capacity in response to changing global demand as a result of patent expiry of a number of key medicines and the need to achieve greater efficiencies in our manufacturing,” said company vice-president Paul Duffy.

He said Ireland remained a “key strategic location” for the company.

Pfizer said it will look to sell the Little Island site after the transfer in conjunction with IDA Ireland and Enterprise Ireland. The company previously successfully sold a site in Dublin to US biotech group Amgen after an earlier restructuring programme.

Pfizer employs more than 3,000 people at six locations in Ireland.

Mercedes Benz to up stake in struggling Aston Martin 13:08
Higher bonuses at Deutsche Bank after unexpected profit 12:52
Next upgrades profit forecast on better-than-expected sales 12:40
Ryanair says Cork and Shannon closures ‘could have been avoided’ 12:23
Failure to invest in 5G could result in €12.6bn economic loss - study 12:02