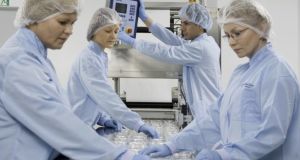 Steripack recorded turnover of €27m for fiscal year 2015, up from €25m a year earlier

Steripack, an Offaly-headquartered company whose medical packaging business was recently snapped up for an estimated €70 million, saw profits more than double last year.

The company, which produces sterile packaging for the healthcare and pharmaceutical industries, reported a pretax profit of €4.8 million for the 12 months ending September 2015, versus €1.7 million a year earlier.

Established by chief executive Garry Moore in 1994, the Clara-based company sold it medical packaging unit to Bemis in April. The group continues to own and operate its contract manufacturing division.

A breakdown of revenues shows 61 per cent of turnover derived from outside of Ireland. Some €10.5 million in income came from the Republic of Ireland, with €13 million originating from elsewhere in the EU and €3.4 million from outside Europe.

Dividends of €21,001 were paid during the year on preference share capital, the company said.

Loans to subsidiaries over the years include a €2.4 million investment in Steripack Medical Poland, which earned trading profits of €2.23 million and had a net asset position of €6.9 million a the end of September 2015.

An additional €9.9 million in investment to the group’s Malaysian-registered subsidiary Steripack Asia was recorded, with the unit incurring trading losses of €36,000 last year.

Steripack’s US subsidiary has received a total of €12.6 million in loans and investments. The division reported a €2.16 million trading loss for the 12 months to the end of September last.