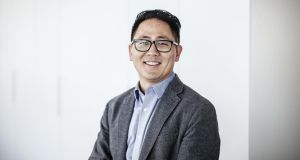 Dr Hubert Lim, who has joined Neuromod as chief scientific officer, is a researcher at the cutting edge of auditory neuroscience, neuromodulation and neuroplasticity.

Irish medtech start-up Neuromod has hired a top global researcher as it looks to commercialise a device to help patients suffering with tinnitus – a chronic and, at times, debilitating ringing, clicking or buzzing in the ears.

Dr Hubert Lim, who has joined Neuromod as chief scientific officer, is a researcher at the cutting edge of auditory neuroscience, neuromodulation and neuroplasticity – the study of the brain and how it adapts and changes to different stimuli over time. These changes can lead to issues such as phantom limb syndrome or tinnitus.

Essentially, Dr Lim’s research studies the ability of the brain to reprogramme over time and examines how that can be harnessed to help patients, including those with tinnitus.

The company, which has to date raised about €9 million from investors including Irish venture capital group Fountain Healthcare as well as Enterprise Ireland and entrepreneur Robert Moffett, is currently conducting critical phase-three trials of its device.

Dr Lim says he has been familiar with the work of Neuromod for some time but had not planned on coming to Dublin. “Then I was approached and asked if I was interested in coming aboard to develop the science side of the business,” Dr Lim said.

He said Neuromod’s very inclusive and transparent approach, including its openness to advice from experts in the field, appealed to him. The US National Institute of Health has been backing this approach, he said, where companies say up front what they are doing and targeting, rather than retrospectively setting parameters that may better fit already gathered trial results.

Dr Lim, who moved to Dublin with his family in December, sees his role as threefold. One priority is advancing the work that Neuromod has done to date identifying parameters for treating different subtypes of patients suffering with tinnitus – work that chimes with his experience over almost two decades.

He says that, until now, the tinnitus field has adopted a one-size-fits-all approach but it is now moving to figuring out patient subtypes and approaching them in a more tailored manner.

“All patients who have been treated with the Neuromod Mutebutton are doing well but not all are doing as well as certain subtypes,” he notes.

More immediately, he will focus on completing the trials currently ongoing in Germany and in Ireland. These are due to finish next month and the next challenge will be proceeding with trials in the key US market.

He will also be interacting with the scientific community. “We don’t want to oversell but we do want to get the message out there of what we have done with our technology,” he says.

Neuromod estimates that, with more than 10 per cent of the global population affected by tinnitus, the market for an effective treatment “has untapped multibillion-dollar demand”. The company expects to be raising further funds after the European trials report as part of then preparation for US trials and commercialisation.

While Neuromod is targeting tinnitus, it is just one of a number of groups working with applications for neuromodulation in areas such as stroke recovery, epilepsy, depression, rheumatoid arthritis, irritable bowel syndrome and even sleep conditions.

These include another Irish company, Mainstay Medical, which is using the same approach to address chronic lower back pain in patients.