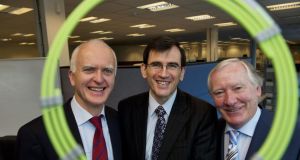 Galway medtech firm Neuravi has raised €19 million to continue to commercial rollout and development of a breakthrough therapy for stroke patients.

While other companies, notably Medtronic/Covidien and Stryker have competing devices, the next generation device from Neuravi promises to restore blood flow faster and also to avoid clot fragmentation, which can be a problem with current devices and can lead to further stroke issues down the line.

The device developed by the Galway firm has secured approval in Europe and is now being rolled out across individual markets, including Ireland where it is being used in Beaumont Hospital.

Justin Lynch, a partner at Fountain Healthcare Partners, says Neuravi has outperformed since it became involved in an earlier €5.2 million funding round in 2012.

“The company has beaten milestone outcomes, it has done it faster and on less money than projected,” said Mr Lynch. “Its execution has been outstanding.”

The new funding is designed to continue the commercial rollout of the device in Europe and to fund a pivotal clinical trial in the United States. That trial is expected to start enrolling patients in the final quarter of this year and deliver results in the second half of 2017.

The funding round was led by Dutch-based Life Science Partners in what is that group’s first investment in the Irish medtech market. Three existing investors – Fountain, Delta Partners and the Western Development Commission – also participated, after which Fountain, Ireland’s largest indigenous dedicated life science venture fund, remains the largest shareholder in the business.

Ischemic stroke, caused by clots in vessels supplying blood to the brain, accounts for 87 per cent of all strokes , reportedly affecting one million patients in Europe every year and a further 700,000 in the United States. Developing an effective therapy offers the prospect of a significant slice of a multibillion euro market.

Prospects for the EmboTrap technology have been boosted by the early conclusion of several large randomised studies on the use of minimally invasive surgical procedure – thrombectomy – alongside more traditional drug therapy in treating stroke patients.

The studies were stopped after interim review because of the conclusive evidence that early surgical intervention improved patient outcomes dramatically – halving the mortality rate.

1 Aldi to impose limits as Christmas toys go on sale
2 Fair deal? Family at odds with hospital and each other not so sure
3 What to consider if older person or loved one needs care at home
4 Irish house prices could buck European trend and fall this year, says S&P
5 Irish elearning company LearnUpon closes €47.4 million investment
6 Ireland ‘needlessly importing timber’ due to Government failures, sawmillers claim
7 Bank of America names new EU hub head as Brexit looms
8 ‘I hate haggling because I hate when people do it to me’
9 Ulster Bank to meet Paschal Donohoe to discuss bank’s future
10 KBC Ireland turns down WRC meeting over hub closures
Real news has value SUBSCRIBE