Liam Nagle to take the helm at Norbrook 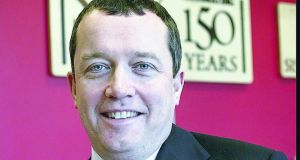 Liam Nagle joined Sisk in 2005 but his next challenge will be in driving growth at Norbrook.

Norbook, the Northern Irish developer and manufacturer of veterinary and animal health medicines, has appointed Liam Nagle as chief executive.

The Newry based firm had been run by its founder, Lord Ballyedmond, Edward Haughey, until his death aged 70 in a helicopter crash in March of this year. Lord Ballyedmond launched Norbrook in 1969, and the company now has turnover of about £210 million.

Mr Nagle, current chairman and former chief executive of construction group Sisk, will take up the position at the beginning of February 2015. Mr Nagle joined the SISK Group in 2005 as head of its non-construction trading activities. He was appointed CEO in early 2008

Speaking of his appointment Mr Nagle said: “I am honoured to be offered the role as chief executive of Norbrook, the business is in an excellent position and I am excited about working with the team to build on its success and take the business to even greater heights.”