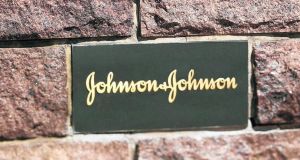 First-quarter earnings, excluding one-time items, were $1.56 a share, compared with the $1.53 average estimate of analysts. Pharmaceutical sales climbed 3 per cent to $7.7 billion.

The results underscore the company’s push to replenish its product lineup as drugs such as hepatitis C treatment Olysio and blood thinner Xarelto face new competition.

An additional challenge comes from the strong dollar since J&J gets about half its sales outside the US. The company cut its forecast for full-year earnings to a range of $6.04 to $6.19 a share, down from a prior prediction of $6.12 to $6.27, because of the currency fluctuations.

Last quarter the company was the first of many drugmakers to report lower-than-expected guidance or sales declines due to the US currency’s gain. The dollar has gained 22 per cent in the past 12 months, driven by projections the Federal Reserve will raise interest rates this year.

The currency changes hurt J&J’s earnings by 7.2 per cent in the first quarter. Revenue fell 4.1 per cent to $17.4 billion, the company said Tuesday.

Two newer drugs helped propel the growth of the pharmaceutical unit. Sales of diabetes medication Invokana almost tripled to $278 million. Cancer treatment Imbruvica, developed with Pharmacyclics and approved by US regulators late in 2013, had revenue of $116 million.

Sales of the company’s top drug Remicade fell 0.6 per cent to $1.6 billion, compared with the $1.77 billion forecast by RBC Capital Markets for the arthritis treatment.

Olysio, which has been facing increased competition, sold $234 million, compared with the $160 million projected by RBC.

J&J’s consumer unit, which makes over-the-counter products like Tylenol and Motrin, fell 4.7 per cent to $3.4 billion.

Revenue for the medical-device business, which has been under pressure from cost-cutting by insurers and hospitals, dropped 11.4 per cent to $6.3 billion.

As part of a plan to focus on growth opportunities, the company is selling its Cordis business, which makes catheters and guide wires, to Cardinal Health for $2 billion. – Bloomberg

6 Graduates now earn more in Ireland than in UK, but Germany tops both