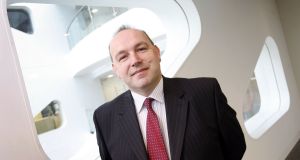 Nuritas chief executive Emmet Browne said diabetes prevention was the first important area of focus for the company, though it expects to target other conditions in future

Nuritas, founded by a Trinity College mathematician, is about to run trials in Ireland on what would be the first treatment available to stop people with pre-diabetes developing the full-blown disease.

The company has just secured €3 million from the EU’s Horizon 2020 fund to finance the trials which, unusually, will run in Ireland.

The Health Service Executive estimates that about 200,000 people in Ireland are “pre-diabetic”, of which 40 per cent will go on to develop the disease over the next five years.

University of Illinois at Chicago College of Medicine professor Emeritus Lawrence Frohman said prevention was accepted globally as key in the fight against a burgeoning diabetes crisis “but we have not seen anything yet to fill this role”.

“The Nuritas clinical studies represent an exciting venture and brings new hope in developing this important field of disease prevention,” he said.

Nuritas uses big data techniques to discover peptides – molecules in food and food byproducts – that can be used by the life sciences sector in supplements and new drugs.

Its technology allows it to discover peptides up to 10 times faster than traditional research techniques and at a fraction of the cost.

Nuritas chief executive Emmet Browne said diabetes prevention was the first important area of focus for the company, though it expects to target other conditions in future.

“This peptide carries huge potential to bridge an enormous gap in medical science and act as a major weapon in the global battle against diabetes, now recognised as a full-blown epidemic,” he said.

Being a supplement rather than a medicine, Nuritas’s treatment faces a shorter regulatory route and the company hopes it will be available for use as a food supplement as soon as 2020.

The company, founded in 2013 by Trinity-trained mathematician and bioinformatics specialist Nora Khaldi, was named one of Europe’s top 10 most innovative start-up companies earlier this year by the European Commission and has attracted high profile investors, including Salesforce founder Marc Benioff and Ali Partovi, who was an early investor in both Dropbox and Facebook.

The World Health Organisation has declared diabetes to be a global epidemic affecting 422 million people, with 1.5 million dying in 2012 alone. Type-2 diabetes accounts for 90 per cent of cases. In England, one in every three adults over the age of 30 are now classed as pre-diabetic.