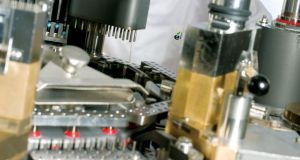 Malin has raised €330 million in one of Europe’s biggest biotechnology IPOs, a source close to the life sciences company has said, surpassing its target range of €275 million to €325 million.

Malin, set up by a number of ex-Elan executives to invest in privately held assets, said earlier this month that leading British fund manager Neil Woodford and the Irish state’s new strategic investment fund had committed to buying around 60 per cent of the total estimated placing.

Over 80 per cent of the book consisted of long term investors including insurer Aviva and Britain’s Pension Protection Fund, the source said, while the small retail and institutional offering was materially oversubscribed and subsequently scaled back.

Malin has said it will invest in companies for which an initial public offering (IPO) or sale is premature and provide the long term capital and industry experience it says venture capital and private equity funds cannot guarantee.

It has seven such firms lined up, from a US. disinfection technology company to a Pan-African distributor, and its IPO topped the €200 million Circassia raised a year ago in the biggest London market biotech debut in years.

The European biotech sector has been slow to catch up with its US peers, which have seen a renaissance in the past two years, but Circassia’s debut was seen as a bellwether with the potential to unlock further listings.