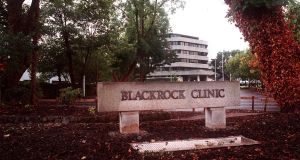 Breccia, a company linked to businessman Larry Goodman, has been granted judgment by the High Court for €7.89 million, plus substantial legal costs, against Dr Joseph Sheehan, a co-founder of Dublin’s Blackrock Clinic.

Mr Justice Michael Quinn had last May said he would grant judgment for some €19 million to Breccia, but, having taken into account factors including Breccia receiving payments concerning shares of Dr Sheehan in Blackrock Hospital Ltd (BHL), he entered final judgment this week for €7.89 million.

The judge was making final orders following his judgment on the latest stage of marathon litigation concerning control of the clinic.

In the May judgment, Mr Justice Quinn dismissed a range of claims by Dr Sheehan, including that Breccia had conspired with another clinic co-founder, Dr George Duffy, and others to damage Dr Sheehan’s interests concerning purchase of loans made to buy shares in the clinic, and said he was granting a counterclaim by Breccia for judgment against Dr Sheehan.

In a follow-up judgment this week he granted declarations that the purchase by Breccia of Dr Sheehan’s loan facilities was lawful, valid and effective, and that Breccia is entitled, pursuant to the mortgage, to appoint a receiver over and/or exercise the power of sale in relation to Dr Sheehan’s shares in BHL.

Dealing with the judgment amount, he noted he had said in May he would grant judgment for some €19 million on Breccia’s counterclaim, comprising €17.5 million due under Dr Sheehan’s loans and some €1.5 million under a guarantee.

Breccia pointed out its counsel had indicated at the hearing it was not pursuing the €1.5 million sum, and also said certain deductions should be made in the amount of the judgment to reflect payments received by Breccia.

Dr Sheehan’s submissions were confined to seeking a stay on any costs order, the judge noted.

Taking into account all adjustments to the judgment order, the judge said he would grant judgment for €7.89 million.

The judge noted Dr Sheehan had said he wished to appeal the judgment and wanted a stay on costs until the appeal was decided. He had also informed the court he has made a filing in a court in Illinois in the United States, under the US bankruptcy code and was “adhering to the worldwide stay as granted”.

The defendants opposed any stay.

Having regard to his findings, and Dr Sheehan’s record of failing to comply with directions aimed at progressing his appeal on an earlier ruling in the ongoing litigation over control of Blackrock Clinic, the judge refused a stay on the order for costs.

Other issues in the litigation have yet to be decided, including whether an alleged change of control of Breccia triggers the application of certain transfer provisions in the BHL shareholders agreement.