Former head of GlaxoSmithKline in China charged with corruption 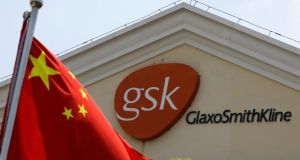 The 10-month investigation into the three billion yuan (€350 million) worth of suspicious travel and meeting expenses and trade in sexual favours at GlaxoSmithKline is the highest-profile international case since the Chinese government launched its massive crackdown on corruption. Photograph: AP

Chinese police have charged the British former head of drugmaker GlaxoSmithKline’s China business and other senior colleagues with corruption, after an investigation revealed the firm had made billions of yuan from schemes that involved bribing doctors and hospitals.

“Xinhua has learned from police officers handling the case that they are suspected of offering bribes to doctors, asking them to prescribe more drugs in order to grow sales volume and, in the meantime pushing up drug prices,” the agency reported.

Life in prison
GSK is the maker of the world’s top-selling drug, the asthma treatment Seretide. The charges, which carry a maximum sentence of life in prison in the case of bribery, were seen as harsher than many industry insiders and China-based foreign executives had expected.

The 10-month investigation into the three billion yuan (€350 million) worth of suspicious travel and meeting expenses and trade in sexual favours at GlaxoSmithKline is the highest-profile international case since the Chinese government launched its massive crackdown on corruption.

The charges caused shockwaves as GSK had said it believed the alleged corruption involved senior Chinese staff only.

Billions of yuan
“[GSK] departments offered bribes to hospitals and doctors as well as personnel to boost their sales. The money involved was in the billions of yuan,” a ministry of public security official told a press conference in Beijing.

The Xinhua report quoted the case of a sales manager at GSK China in Henan province in charge of selling respiratory drugs to more than 10 hospitals in the provincial capital city Zhengzhou.

“A 35-year-old female medical representative . . . working under [him] said she entered doctors’ offices to act as their assistant and meet their needs as much as possible, even their sexual desires,” it said.

GSK issued a statement saying the case was deeply worrying. “We take the allegations that have been raised very seriously. They are deeply concerning to us and contrary to the values of GSK . . .”

China has made strong advances in healthcare since the 1980s but there is anger among Chinese people about the cost of drugs, and many blame medical corruption.

The National Development and Reform Commission, China’s top economic planning agency, is investigating the costs and prices of drug manufacturers including GSK, Merck, Novartis and Baxter to improve the pricing system.