Move would drastically increase cost of the alternative smoking product 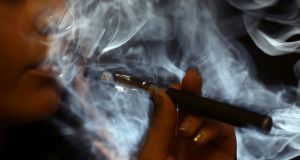 Steep duties are currently levied on traditional cigarettes but not on ecigarettes, making the tobacco-free alternatives much cheaper. Photograph: Chris Ratcliffe/Bloomberg

The European Commission is considering taxing ecigarettes in the same way as their traditional cousins in a move that would drastically increase the cost of the alternative smoking product and further hinder their take up.

The commission has asked excise duty experts from across the EU to consider the “best way to achieve fiscal equal treatment” between ecigarettes – where users inhale nicotine vapour – and normal tobacco products.

Steep duties are currently levied on traditional cigarettes but not on ecigarettes, making the tobacco-free alternatives much cheaper. The EU demands all member countries impose a minimum of a 57 per cent excise duty on every packet of cigarettes purchased in EU. By contrast, in most EU countries ecigarettes are only subject to the value added tax, which is about 20 per cent in most member states.

Tax policymakers from across Europe met in Brussels yesterday to discuss whether ecigarettes should be covered by excise duty.

The ecigarette market is highly fragmented, with users increasingly buying from specialised vape shops and online retailers. Sales from supermarkets, where brands owned by established tobacco companies dominate, have plateaued.

But Ms Kendall said more regulation, including increased taxes, of the ecigarette market would lead to the closure of smaller producers in the sector.

“You would see quite a lot of rationalisation with the introduction of any sort of regulation. It’s very much at the moment like the Wild West,” said Ms Kendall.

Tom Pruen, chief scientific officer at the Electronic Cigarette Industry Trade Association, said that there was no justification for a “sin tax” on ecigarettes as there was no clear demonstrable harm from the products.

The rapid growth of ecigarettes – which led some analysts to predict that they would overtake normal cigarettes in popularity within a decade – has slowed in recent months. Although their use has tripled in the UK since 2012, the proportion of smokers using them has been flat for 18 months, according to the latest survey.

1 How long can Government afford to keep State pension age at 66?
2 Guinness brings out a non-alcoholic version of the black stuff
3 Frank Fitzgibbon stepping down as Sunday Times editor
4 How much will a Covid-19 vaccine cost?
5 Farm lobby seeks EU ban on vegan ‘burger’ and veggie ‘sausage’
6 How on earth do we the calculate the cost of Level 5 for the Irish economy?
7 Paul Coulson plans record $1.8bn Ardagh investment
8 Google's incredible power is the result of decades of regulatory failure
9 Budget 2021: fuel prices rise and high-emission cars hit
10 Irish start-up Wayflyer raises €7.8m in seed funding
Real news has value SUBSCRIBE