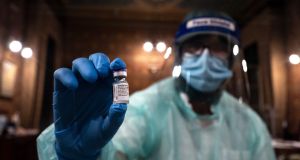 The first stage of BioNTech’s vaccine process, producing the active ingredient known as mRNA, has begun at a new plant in Marburg. Photograph: AFP via Getty

The European Medicines Agency (EMA) expects Johnson & Johnson to file for approval of its Covid-19 vaccine in the EU within the next few days. Approval of this inoculation is viewed by many as pivotal in speeding up the overall rollout of vaccines, in part because it may only require one dose.

BioNTech’s new plant in Marburg, an hour north of Frankfurt, will have an annual production capacity of 750 million doses, much of which is earmarked for the European market.

And separately, it emerged that the EMA is planning to speed up assessments of any Covid-19 vaccines that are modified to protect against variants of the virus. Marco Cavaleri, chair of the vaccine evaluation team at the EMA, said on Friday there should be no need for lengthy large-scale trials like those needed to evaluate the first Covid-19 vaccines, since tweaks for new variants can be tested on smaller groups

News of the new BioNTech plant had gone live was greeted with relief in Berlin, after weeks of reports of vaccine bottlenecks and delivery shortfalls.

Wasting little time, BioNTech, based in nearby Mainz, announced it had started the first stage of the vaccine process in the new plant: producing the active ingredient known as mRNA.

“A single mRNA batch of the current scale is sufficient to produce around eight million vaccine doses,” the company said in a statement.

Once the mRNA has been produced, it is purified, concentrated and transported to contract partners for the final “fill-and-finish” stage.

Some 250 million doses are expected to come from the new facility in the first half of 2021, part of a push by BioNTech and its United States partner Pfizer to meet unprecedented global demand for its vaccine.

While controversy surrounds the efficacy of the vaccine produced by competitor AstraZeneca, BioNTech and Pfizer have increased their production goal from 1.3 billion doses to 2 billion this year.

The boost has come as a result of new production processes, upgrades to an existing facility in Belgium and the new Marburg plant.

Acquired from Novartis last year, the new factory has a long and proud history. It was established in 1904 by Emil von Behring, who developed the antitoxin for diphtheria and tetanus. Mr von Behring built the original plant on the new BioNTech site from his 1901 Nobel Prize in Medicine money.

BioNTech has also announced a partnership with French pharmaceutical company Sanofi to produce 125 million doses for the European Union from its Frankfurt plant starting in July.

BioNTech is working closely with other German companies to meet world demand and ease production bottlenecks. This week it signed a deal with Evonik, based in the western city of Essen, that could help ease scarcity of other vaccine components.

Evonik has emerged as a key producer of lipid molecules – fatty chemicals that encapsulate the mRNA active ingredient, ensuring it doesn’t break down in the body.

At two new plants Evonik will ramp up production of lipid molecules, which are essential for the Covid-19 vaccines developed by BioNTech, Moderna and CureVac.

“The pandemic demands decisive action,” said Christian Kullman, chief executive of Evonik. “We are therefore doing everything possible to supply our partners with the critical lipids they need.”

Evonik has announced plans to boost production by mid-year while another German lipid producer, Merck of Darmstadt, said it will boost deliveries by year-end.