Valeant Pharmaceuticals shares shed a further $4.30, or 2.58 per cent 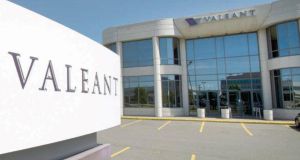 Valeant Pharmaceuticals continued to lose ground yesterday after the company was targeted by US Democrats over rising drug prices.

Valeant shares shed a further $4.30, or 2.58 per cent in morning trade. Valeant shares fell the most in four years after politicians asked to subpoena the company for documents relating to drug price increases.

“We believe it is critical to hold drug companies to account” when they buy old drugs and raise their prices, 18 Democratic representatives wrote in a letter to Jason Chaffetz, the chairman of the House’s committee on oversight and government reform.

They highlighted Valeant’s heart drugs Nitropress and Isuprel, whose prices increased by 212 per cent and 525 per cent the day Valeant acquired the rights to sell them.

Valeant’s shares have fallen for three days after Democratic presidential candidate Hillary Clinton said last week that she would reform the drug industry to protect consumers from big price increases.

She was responding to media reports on Turing Pharmaceuticals chief executive Martin Shkreli, a former hedge fund manager, who raised the price of a decades-old antibiotic 50-fold, to $750 a pill from $13.50 a pill, after acquiring it.

Mr Shkreli said last week he’ll lower the price of the drug though he still considers it a bargain. Ms Clinton outlined a plan that included a mandate on research and development spending, a proposal which could hurt companies like Valeant that rely on acquisitions. Last year, Valeant spent $246 million on R&D, far less than companies of similar size, according to data compiled by Bloomberg.

Valeant shares fell 17 per cent on Monday. Shares of Endo International, Mallinckrodt, Horizon Pharma – all of which are domiciled in Ireland – and Concordia Healthcare all fell more than 10 per cent . Only Endo bucked the trend yesterday. – (Bloomberg)