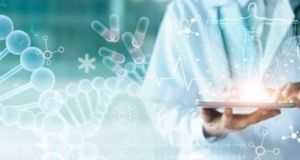 Irish data analytics company Diaceutics expects a “substantial reduction” in sales in the second half of the year due to the impact of the Covid-19 pandemic, and has warned that its full year revenue may be materially lower than last year.

The Belfast-based company published its half year results for the six months ended June 30th, 2020, on Monday, which showed revenue increased by 21 per cent to £5.3 million from £4.4 million in the same period the year before.

The company, which provides services to the global pharmaceutical industry and is listed on the AIM market of the London Stock Exchange, also swung back into profit, earning £300,000 as compared with a loss of £2 million during the first six months of 2019.

However, the company was downbeat in relation to the outlook for the remainder of the year. It said it suffered a lower than expected conversion of proposals from mid-August due to some deferrals of spend on client brands and delays of certain new product launches due to Covid-19.

“Specifically, a quarter of the therapy brands we work on indicated they were now undergoing a shift and reprioritisation of their budgets,” said chief executive Peter Keeling.

“This included brands where there was a deferral of their spend, and brands where product launches were pushed back by more than six months. Our remaining planned projects continue to close and we continue to win those contracts and competitive requests for proposal.

“In preparing our outlook, we have assumed that the limited access to EU and Asian laboratories will continue through to December 2020.”

Mr Keeling said directors now expect a substantial reduction in sales in the second half of the year, such that this year’s revenue may be materially lower than the prior year.

“We have taken immediate steps to reduce costs in the remainder of the year by £600,000,” he said.

“We have started planning and repositioning resources to support the planned launch of the DXRX platform and servicing the ongoing level of customer demand. This is expected to result in exceptional costs in the second half.

The group closed the half year with a strong balance sheet showing a cash balance of £29.8 million as compared with £14 million the year before having raised £20.5 million before expenses from a secondary fundraising, which was announced on June 11th.

“All aspects of the healthcare business have been impacted in unprecedented ways by Covid-19 and we first saw this in our EU and Asian implementation projects,” said Mr Keeling.

“We have had to adjust plans for the second half to address very recent decisions relating to deferred budgets on a number of our client brands and ongoing delays with access to laboratories. The fundamentals of the precision marketplace and its dependency on better testing remain strong.”