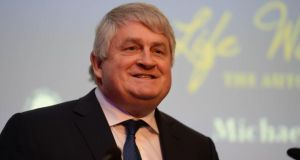 Denis O’Brien: was rumoured two weeks ago to have been an under-bidder for a debt associated with the Blackrock Clinic in south Dublin, but this has not been confirmed. Photograph: Dara Mac Dónaill


Billionaire Denis O’Brien has taken control of the Beacon Private Hospital in Sandyford in Dublin.

The hospital, which employs 600 staff and 200 medical consultants, was previously owned and operated by the University of Pittsburgh Medical Centre, an American private hospital operator.

“It is with regret today that UPMC Ireland is announcing that it will be divesting its ownership and relinquishing all management responsibilities at Beacon Hospital,” UPMC said in a statement.

UPMC said it had tried over the past 15 months to restructure its outstanding bank debt of about €100 million owed to Ulster Bank, a subsidiary of the Royal Bank of Scotland (RBS).

“A generous offer was made, but ultimately Ulster Bank/RBS elected to sell the Beacon Hospital debt to Irish businessman Denis O’Brien,” UPMC said.

“The new debt owner will not restructure the debt and clearly indicated his intent to own, control and manage Beacon Hospital,” it added.


Nominal value
UPMC said it was selling its ownership in the hospital for a nominal value and was relinquishing all management responsibilities and ceasing all affiliation with the hospital from Monday April 14th.

Michael Cullen, a co-founder of the Beacon Hospital, is a friend of Mr O’Brien and his business associate Lucy Gaffney.

Mr Cullen is understood to be supportive of the arrival of the telecoms tycoon as the hospital’s new owner.

Mr O’Brien was rumoured two weeks ago to have been an under-bidder for a debt associated with the Blackrock Clinic in south Dublin, but this has not been confirmed.

Beacon’s current chief executive Joel Yuhas did not respond to attempts to contact him about the future leadership of the hospital.

In its statement, UPMC also said: “UPMC Ireland’s cancer centre in Waterford, a joint venture with the Whitfield Clinic, is unaffected by the changes in ownership at Beacon Hospital.”

Ownership of the Whitfield Clinic could change, however, as debt associated with Whitfield is believed to have been sold off by the special liquidator of Anglo Irish Bank last week to CarVal, an American investment fund.