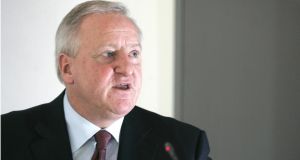 The Beacon Hospital, the private hospital owned by entrepreneur Denis O’Brien, has appointed a new board led by non-executive chairman Colm Doherty, the former managing director of AIB.

Maureen Lynott, the former chairperson of the National Treatment Purchase Fund who has served on both the boards of VHI and St James’s Hospital, and Dermot Hayes, who works with Island Capital the investment company owned by Mr O’Brien, are both joining the new board of Beacon.

Niall Devereux, a former director with health insurer Bupa in China, Thailand and India, co-founded Bupa Ireland in 1996. He is the final new member of the south Dublin hospital’s board. Mr Devereux is chief financial officer of Topaz, Ireland’s largest fuel retailer, which is also owned by Mr O’Brien.

Businessman Michael Cullen, who is chief executive of the hospital, and cardiothoracic surgeon Prof Mark Redmond, Beacon chief of staff, are also on the board. Both are co-founders of the Beacon.

The hospital previously announced in October it was strengthening its team by appointing Dr Jennifer Westrup and Mr Michael Murphy as joint medical directors.

Mr O’Brien took control of the Beacon Hospital earlier this year when he acquired €100 million-plus of Ulster Bank debt for a reported €40 million. The hospital was previously controlled by UPMC, an American healthcare group.

Beacon’s strong board is seen by market sources as not just securing its position in Dublin where it treated 83,000 patients in 2013. It also has the experience to help it expand either by acquisition, new partnerships or new developments as originally envisioned by its two co-founders prior to Ireland’s economic recession.

Mr Doherty in particular is a hugely experienced dealmaker who previously headed up AIB’s Capital Markets division before being appointed as head of AIB in 2009.

The 214-bed hospital is part of the Beacon Medical Group which also has a consultants clinic and dermatology unit among other interests. Beacon’s Medical Group’s most recent initiative is Beacon Nursing Care and Recuperation Group.