APC partners US client for fast turnaround on cancer therapy 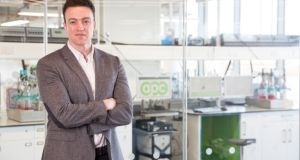 Irish pharma research company APC is partnering a major US player to develop a new cancer therapy solution that it hopes to take from discovery to market in just 18 months, as against a typical turnaround of five years.

The pharmaceutical research company designs, develops and markets proprietary engineering platform technologies that reduces the time, cost and risk in the development of medicines.

APC said it is working with the unnamed client on an innovative immuno-oncology programme for cancer that is currently in Phase III trials.

The manufacturing process developed by the company in support of the client’s technology platform, stimulates the patient’s own immune system to recognise and attack cancer cells.

APC, which works with eight of the world’s top 10 pharmaceutical companies and half of the leading biotech firms, was established by Prof Brian Glennon and Dr Mark Barrett as a spin-out from UCD’s school of chemical and bioprocess engineering in 2011,

The company, which has just completed a €10 million investment to double the size of its Cherrywood facility and take on additional staff, said it is also working on more than 20 other medicines for a variety of cancers, respiratory diseases, Alzheimer’s and HIV.

APC, which claims to be the largest employer in Ireland of PhD qualified chemical engineers and one of the biggest for PhD-level scientists, currently employs 120 people but expects headcount to grow to about 170 by the end of next year.

The company has developed two engineering platform technologies, ACHIEVE and BioACHIEVE, for troubleshooting research and manufacturing issues and improving the design of chemical and biopharmaceutical compounds.

The €10 million spent on expanding its headquarters included a €2 million joint investment with client partner Bavarian Nordic to create a 500 litre biologics facility.

APC was previously shortlisted for The Irish Times Innovation Awards, while Dr Barrett was among the finalists for last year’s EY Entrepreneur of the Year awards.