Amarin – an overnight success 10 years in the making 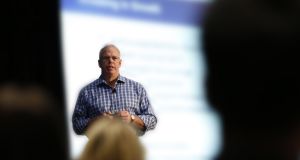 John Thero: “We’re taking the approach of make it [Vascepa] affordable, and hopefully we can help millions of patients and make some money along the way”

Stunning they called it. And it was, as Irish-American pharma group Amarin announced the results of a key clinical trial for its cholesterol drug last week that were better than even most observers dared hope. It had been a long time coming.

John Thero has been there for much of that journey, guiding a small one-drug company in a 10-year battle with regulators to recognise the therapeutic benefits of its highly-purified fish oil.

“People have been joking that we’re an overnight success after 10 years in the making,” says Thero. In truth, it has taken even longer.

The man, who started his career in the ill-fated Arthur Andersen where he trained as an accountant, built his reputation in finance roles at a number of US pharma groups before joining Amarin. He threw in his lot with the Irish-American business at a pivotal moment for the company.

The success of Amarin has been tied to the fortunes of a drug that, over the years, has been seen as a prospect for treating a number of different conditions. Originally using the moniker AMR101, its active ingredient is an ultra-pure form of ethyl EPA – essentially a fish oil derivative.

Like so many early-stage drug developers, its has been a colourful journey, full of dramatic surges in the share price and even more precipitous slumps as the drug either promised success or yielded failure in various clinical trials.

All along the Irish connection has been strong. Then a UK business called Ethical Holdings, it was rescued in 1999 by Elan. What was then Ireland’s major indigenous company provided much of the seed talent, and cash, that would shape the company’s future. This included Thomas Lynch, who was chairman of the business, and current chairman Lars Ekman.

Fountain Healthcare Partners, a life sciences-focused private equity group, that also has its origins in Elan, led a key funding round when Amarin’s financial future once again hung in the balance in 2009.

Initially the company targeted Huntington’s disease but a disastrous clinical trial result in 2007 put paid to that ambition. The fallout was nearly sufficient to collapse the company.

Amarin turned its attention to age-associated memory impairment in patients without dementia before discovering that AMR101 had potential in lowering levels of harmful blood fats – called triglycerides.

Triglycerides are a type of fat stored from food intake and released as energy. At elevated levels they increase the risk of heart disease.

But time, or more pertinently, money was running out. By July 2009, Amarin had a three-week deadline to raise funds or face potential collapse. The company cobbled together money from shareholders to put the drug into phase III in-patient trials in late 2009, just as Thero was joining the business.

His initial role as chief financial officer was to manage the money and ensure Amarin had the funds to try to deliver on the promise it saw in AMR101.

One year later that effort paid off when results from the trial proved that AMR101 was indeed highly effective in reducing the blood fats which leave patients vulnerable to heart attacks and strokes.

The company’s shares jumped 60 per cent on the news. A second trial confirmed the positive results in a broader group of patients the following year. Most importantly, it achieved its results without causing a rise in so-called “bad” cholesterol. That appeared to give it an edge on the only competing product on the market at the time.

Amarin was set fair to commercialise a breakthrough heart drug with potential blockbuster status. Once again there was a catch.

The US drug regulator, the Food and Drugs Administration (FDA), was happy to license the drug, now called Vascepa, for people with extremely high levels of triglycerides on the basis of the data from the first of the two trials. However, the FDA was unconvinced by its potential for a much wider market addressed by the second trial. That meant around four million potential patients in the US compared to almost 40 million.

The drug would be important to the smaller cohort of patients, but as a commercial proposition it was only a niche market.

Unnerved by the failure of a number of highly-touted fish oil drugs, the FDA panel looking at Vascepa said in 2013 that the company would need to complete another expensive and time-consuming testing programme if it wanted to prove the case for the drug in the wider market.

Sensing the potential of Vascepa, Amarin had already started a trial in 2011 to see if it could show that the drug could reduce the incidence of heart attack or stroke in patients at risk who were already on statins. The Reduce-It trial – if successful – would open the door to a 70 million patient market in the US alone. But it would not report initial results until 2016 at least.

The prospect of organising and financing an 8,000-plus patient, multi-year trial with the much-reduced income flow likely from the limited marketing licence approved by the FDA took much of the euphoria out of Amarin’s stock.

It was a $300 million burden for a company that was still loss-making. Then chief executive Joe Zakrzewski made it clear at a press conference that the company was unsure if it could fund the project.

Amarin retrenched again, cutting costs and halving staff numbers. It also searched for a partner – or a buyer – that might have the financial muscle to get this key Reduce-It trial over the line. None materialised and investors grew even more wary.

It was hardly a propitious moment to step into a CEO role for the first time, but Thero took the opportunity when Zakzrewski stepped down in December 2013.

A family history of heart disease gave him an appreciation of the importance of the Reduce-It trial, and his background in finance helped guide the company through lean times without pulling the plug.

“Any time you’re testing a major hypothesis that potentially affects one-in-four adults you can follow data, but you never quite know for sure,” says Thero. “When you’re doing things for the first time there’s always a risk involved. But we believed that there was tremendous data supporting our likelihood of success. Clearly there were a lot of doubters along the way, a lot of people telling us that we shouldn’t believe.”

When they came last week the figures were even better than expected – at least by experts outside the company. The clinical trial indicated a 25 per cent reduction in the risk of often fatal major adverse cardiovascular events. That means one-in-four patients who would otherwise suffer a heart attack or stroke not doing so.

“It is extremely gratifying and exciting that we have results that we believe are going to lead the improved health globally of millions of people,” says Thero. “This is, in our view, the most significant advance in preventative cardiovascular care since the introduction of statin therapy about 30 years ago.”

And while Amarin was battling to prove the case for its drug, many existing or competing therapies were disappointing.

“The landscape has turned out essentially exactly as we had outlined, which is that if you have the wrong therapy you’re not going to get the right results,” says Thero. “There’s been a lot of different big companies, small companies, trying to reduce risk beyond cholesterol management [statins]. And we are the first one with a commercial product that we think is positioned to be able to help the masses in that regard.”

Next up for the company is the release of the full trial data in November, followed by a new submission to the FDA early next year. Thero is hopeful that approval will be forthcoming later in 2019.

Then comes the challenge of persuading a sometimes cautious medical establishment to prescribe the drug.

“A 25 per cent relative risk-reduction in major adverse cardiovascular events, like heart attack, stroke and death, expensive, painful stuff. I think a lot of docs are going to take notice,” says Thero.

Even ahead of last week’s announcement Amarin was beefing up its sales teams and it now expects to have between 400 and 500 representatives on the road for a dramatic sales push in the US.

The latest assessment is that there are roughly 38 million people on statins in the US alone. Many of them are among the estimated 57-70 million people with elevated triglycerides. That, says Thero, means there are millions, “potentially tens of millions”, of patients who could benefit from Amarin’s therapy.

Affordability is a key selling point for Thero, who notes wryly that “the most expensive therapy is a therapy that doesn’t work”.

“We’re proud that patients with commercial insurance in the United States can get our product for about $3 per month. We’re taking the approach of make it affordable and hopefully we can help millions of patients and make some money along the way.”

As the drug is already on sale in the market, albeit FDA-approved for a more restricted group of patients, doctors have the discretion to start prescribing it more widely even ahead of a formal approval process. And, in part thanks to a successful First Amendment (free speech) legal action against the FDA when it tried to shut down communication, Amarin has kept doctors informed of the drug’s progress and potential.

While the US is clearly the primary commercial focus, Vascepa is undergoing trials in China, and Amarin has done deals in the Middle East and Canada. It says it will be pursuing someone to promote the drug in Europe.

Ireland remains an important part of the business. “We do have some operations in Ireland,” says Thero. “But unlike a lot of US companies that have tried to come to Ireland as a tax domicile, we are a technology that was advanced and developed here, that just has been exported to the United States. So our core operations, ownership of the technology and future profits will all be running through Ireland.”

Part of the price of success is attention, and since the results were announced last week the rumour mill has been full of talk of a potential takeover. Citi analyst Joel Beatty named pharma giants Amgen, Regeneron and Sanofi – all of which have significant heart drug businesses – among potential suitors.

Thero is sanguine. “We think that by virtue of our having now five years of experience manufacturing the product, working with doctors, having supply, etcetera, that we’re quite capable of growing this on our own.

“That being said, we work for our shareholders, and while we’re not out looking for someone to take us over, if somebody should make such an overture we will do what’s best for the shareholders.”

Why is he in the news? The company recently announced data showing its fish oil drug Vascepa can lower the incidence of heart attack and stroke in patients with high blood fats and on statins by 25 per cent.