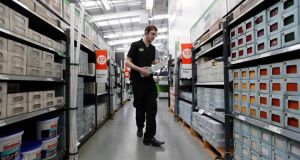 B&Q Ireland sought the appointment of an examiner on January in a bid to rescue the business which was significantly loss-making. Photograph: Reuters/Luke MacGregor

The High Court earlier approved an investment plan for the group.

Under the scheme, B&Q’s parent Kingfisher is to invest more than €2.4million. The money will allow for eight shops around the country to continue trading - along with the retention of the 640 jobs.

B&Q Ireland sought the appointment of an examiner in January in a bid to rescue the business which was loss-making.

The group’s rescue plan involved the closure of its Waterford outlet, which ceased trading in May with the loss of 47 jobs. Four outlets under threat of closure will now remain open following the agreement secured by the examiner.

Brian Mooney, chairman of B&Q Ireland, welcomed the restructuring and paid tribute to staff who, he said, had maintained standards and service throughout a challenging period.

“B&Q Ireland employees have had a challenging three months, and so today’s encouraging plan is a great relief. There is huge regret that the Waterford store was not viable, but, for the rest of the business, we look confidently forward to a sustainable future. We are more committed than ever to our operations in Ireland, and our loyal customers and employees,” said Mr Mooney.

He said the company’s difficulties were due to the deterioration of the economy and unsustainable rents.

B&Q Ireland, which has operated in the State since 2002, has outlets in Athlone, Cork, Galway, Limerick, Naas, and at three Dublin locations; Liffey Valley, Swords, and Tallaght.