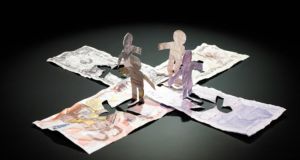 Ireland has for the first time been named as the “best country for business” in rankings carried out by renowned US financial magazine Forbes.

In an article announcing the results of the rankings, Forbes describe Ireland as having been “devastated” by the recession and in receipt of an €85 billion bailout to prop up the banking system.

“Despite these economic troubles, Ireland still maintains an extremely pro-business environment that has attracted investments by some of the world’s biggest companies over the past decade,” says the magazine.

“Ireland scored well across the board when measuring its business friendliness. It is the only nation that ranks among the top 15 per cent of countries in every one of the 11 metrics we examined to gauge the best countries,” says the article.

The article quotes Moody’s Analytics’ economist Melanie Bowler who specialises on Ireland. She says Ireland has continued to attract direct foreign investment “despite its problems”.

She highlights the “educated workforce” and 12.5 per cent corporate tax rate as “big draws” for companies, as well as the language factor. “You want to have a common language if you are setting up operations in Europe,” she says.

“Dublin has already established itself as a location for multinationals, so it has the necessary infrastructure for other companies to easily move into the country and set up shop.”

The article in Forbes also says the State’s recent troubles have made it “more attractive” for companies moving in.

“Nominal wages fell 17 per cent between 2008 and 2011, which helped keep labour costs in check. Unemployment remains stubbornly high – a recent 12.8 per cent – providing companies a large labour pool to pick from.

“There are now more than 1,000 overseas companies with a presence in Ireland and they employ 150,000 of the nation’s 1.9 million workers.”

New Zealand placed second in the rankings – down from first place last year – while Hong Kong completed the top three.

Minister for Jobs, Enterprise and Innovation Richard Bruton said the finding by Forbes was a testament to the hard work and innovation of Irish businesses and workers.

Speaking from Indonesia where he is attending the World Trade Organisation ministerial conference, he said: “It is the latest in a range of indicators which shows that the environment for business here is steadily improving, and shows that the hard work and sacrifices of so many people are yielding tangible results in terms of international competitiveness and the jobs we so badly need.”