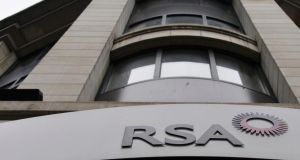 RSA Insurance Group surged 11.3 per cent after Zurich Insurance said on July 28th, 2015 it was weighing up a bid for the British group with a market capitalisation of £4.4bn. Zurich fell 3 per cent. (Photograph: Toby Melville/Reuters)

Zurich Insurance is weighing a bid for British rival RSA which could top $8 billion and attract counter-offers as insurers look to diversify amid toughening regulations.

RSA, which has an operation in Dundrum, Co. Dublin, is Ireland’s largest insurance company. It was hit by an accounting scandal in November 2013, and its chief executive, Philip Smith, was suspended. The Employment Appeals Tribunal recently founded in favour of Mr Smith and he was awarded €1.25 million.

Zurich Insurance also has a significant Irish operation, employing over 1,000 people, and its regional Europe Middle East and Africa EMEA headquarters are also based in Dublin.

European Union rules due in January governing how much money insurers must set aside to protect against market shocks have already prompted some tie-ups. The rules reward insurers with a breadth of geographical or sector coverage, as this cuts their capital costs.

“Zurich notes the recent market speculation in relation to RSA Insurance Group and confirms that the company is evaluating a potential offer,” it said on Tuesday. “This announcement does not amount to a firm intention to make an offer and there can be no assurance that any offer will be made.”

RSA, which has a market capitalisation of 4.4 billion pounds ($6.9 billion) and is best known for its More Than home and motor insurance brand, said it had held no talks with Zurich and received no proposal, advising shareholders to take no action.

The Financial Times said Zurich was considering a bid valuing RSA at £5.5 billion, or 550 pence a share.

Barclays analysts said Zurich had around $3 billion in surplus cash and could take on debt of up to $5 billion.

“RSA has many strengths that would complement our business,” a Zurich spokesman told Reuters. “RSA is very clearly strong in Britain but also in Scandinavia and Canada. And they have business in Latin America, a market which we want to expand.”