Workers at Irish Life to hold one day strike 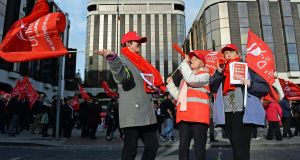 Workers at insurance giant Irish Life have voted to hold a one-day strike this Thursday.

A dispute has been ongoing since the beginning of November, when four two-hour stoppages were held.

The dispute centres on the company’s unilateral imposition of a new pay model.

Unite represents nearly 1,200 Irish Life workers in Dublin and Dundalk, and a ballot of these workers returned a two-thirds result in favour of escalated strike action. The workers also voted to hold a strike on January 20th.

Unite regional officer Maeve Brehony said the company’s “intransigence” has forced an escalation in this dispute.

She accused the company of intimidation tactics and of trying to substitute so-called focus groups for collective negotiation. She said Unite members are not prepared to accept a situation where management unilaterally imposes a new pay model while deciding it will negotiate collectively with some workers but not with others.

Brehony urged Irish Life management to resolve the dispute by coming to the table and negotiating in respect of all its workers.

Irish Life says Unite is seeking to change long-established mechanisms for pay reviews for specialists and managers who have not previously been covered by collective bargaining on pay.

1 Aer Lingus confirms job cuts due to ‘decimation in demand’
2 Passengers face queuing in car parks at Dublin Airport
3 Why is Germany suddenly embracing its inner Keynesian?
4 State pension age deadlock in Government formation talks
5 Prospect of foreign travel highlights remaining restrictions here
6 In six months we will be in the grip of a 1980s-style recession
7 Government restores hope to the tourism and hospitality sector
8 Revenue tells court it was entitled to raise €1.64bn tax assessment against Perrigo
9 Ikea among major retailers to reopen next week
10 Domestic economy may get boost from multinationals
Real news has value SUBSCRIBE