New combined entity to be domiciled in Ireland 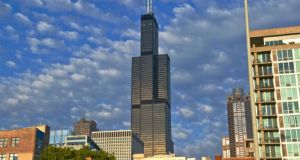 The Willis Tower in Chicago. The combined company, of which Willis shareholders will own 50.1 per cent, will be named Willis Towers Watson

Willis, whose Irish unit was formerly known as Coyle Hamilton, said the companies had agreed to combine in an all-stock merger of equals which has been unanimously approved by both boards.

The combined company, of which Willis shareholders will own 50.1 per cent, will be named Willis Towers Watson and will be domiciled in Ireland.

Willis, which is the world’s third-largest insurer, moved its legal place of incorporation to Ireland from Bermuda for tax and other reasons in September 2009. With roots dating back to 1828, the group operates on every continent with more than 18,000 employees in over 400 offices.

The new combined entity will have approximately 39,000 employees in over 120 countries, and pro forma revenue of approximately $8.2 billion with adjusted earnings before interest, taxes, depreciation, and amortisation (ebitda) of over $1.7 billion for the twelve months ended December 31st, 2014.

“These are two companies with world-class brands and shared values. The rationale for the merger is powerful - at one stroke, the combination fast-tracks each company’s growth strategy and offers a truly compelling value proposition to our clients,” said Dominic Casserley, chief executive of the Willis Group.

“Together we will help our clients achieve superior performance through effective risk, people and financial management. We will advise over 80 per cent of the world’s top-1000 companies, as well as having a significant presence with mid-market and smaller employers around the world,” he added.

Upon completion of the deal, Willis chairman James McCann will take on the same role in the combined group with Towers Watson chief executive John Haley continuing his role. Mr Casserley will be deputy chief executive. The new board will consist of six directors nominated by Willis and six by Towers Watson.

“This is a tremendous combination of two highly compatible companies with complementary strategic priorities, product and service offerings, and geographies that we expect to deliver significant value for both sets of shareholders,” said Mr Haley.

The merger of the two brokers comes amid a flurry of consolidation in the insurance industry as companies seek to increase scale and bolster revenue amid falling rates and increased competition.

The deal is “driven by business purpose, not from a tax planning standpoint,” Mr Haley said. “The tax benefits that are derived just happen to be a nice consequence of the transaction. We don’t see a lot of regulatory risk from the tax standpoint when we look at this deal.”

1 Coronavirus: Construction sector most significant part of new shutdown
2 Wetherspoon’s panto-villain chairman may have the last laugh
3 Can husband keep savings and half the house in divorce?
4 British exceptionalism backfires in style as Johnson tests positive for coronavirus
5 Remote working doesn’t suit everyone, and it exposes woolly leadership
6 Volkswagen burning through €2bn in cash per week
7 Will Covid-19 force Primark to rethink decision not to sell online?
8 UK needs to be honest about its Covid-19 strategy
9 Retail landlords worried rents will dry up during Covid-19 crisis
10 Usit travel group in liquidation due to coronavirus crisis
Real news has value SUBSCRIBE