VHI signals increase in customers for 2015 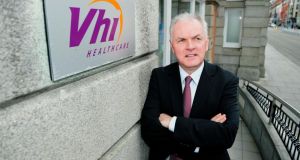 VHI chief executive John O’Dwyer: It is the first time we have had growth in years. Photograph: Aidan Crawley

The VHI expects a significant increase in the number of its customers during 2015, the first such increase since the economic downturn a number of years ago and the latest indicator of rising employment in the economy.

Chief executive John O’Dwyer said he expects to see growth of 15,000-20,000 in the number of people taking out its products this year.

The VHI is the state’s largest private health-insurance provider, with about one million customers and €1.5 billion in annual premium income.

Mr O’Dwyer told The Irish Times the VHI lost customers when the market contracted but is now beginning to see the market starting to grow again.

While the new community-rating rules gave the figures a boost, he said, a lot of the growth is due to increased employment in the economy.

The insurance group became a regulated entity for the first time at the end of July after negotiating a subordinated-debt deal with Berkshire Hathaway, allowing the VHI satisfy the Central Bank’s demands in relation to capital.

He said the development had given a “fantastic lift” to the VHI, which now has “a little more freedom” to offer more products to its customers, for example life cover and income-continuance products.

Given its size in the Irish market and likely demographic changes in the coming two decades, Mr O’Dwyer said the VHI wants to not only sell health insurance but also influence how healthcare is delivered in Ireland.