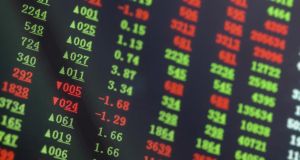 Quintillion, a hedge fund administrator company based in Dublin’s docklands, has been bought out by US Bancorp

Quintillion, a hedge fund administrator company based in Dublin’s docklands, has been bought out by US Bancorp, the fifth largest bank in the US, for an undisclosed sum.

Quintillion, which has about $18 billion of assets under management, employs about 55 staff in the Irish Financial Services Centre, who will all transfer to US Bancorp.

Its management team, led by chief executive Joan Kehoe, will continue to run the company for its new owner under the Quintillion banner. Padraic O’Connor, a former managing director of NCB stockbrokers, is a non-executive director of the company.

Management, comprising six former senior executives from the Irish operation of PFPC International, owned 75 per cent of the business prior to the sale. The remaining stake was held by US investment banking giant JP Morgan.

‘No pressure to sell’
Enterprise Ireland, the State agency responsible for growing domestic companies, invested €650,000 in Quintillion preference shares in 2009, which will also be repaid under the terms of the deal.

Ms Kehoe last night said the transaction closed on Friday, following several months of negotiations with the US buyer.

“We were under no pressure to sell, and everybody is staying on,” said Ms Kehoe.

1 Bank leaked my loan request to family who tried to rip me off
2 Eason acquires rival Dubray Books for undisclosed sum
3 Solar panels: Are they worth the investment?
4 When the Chemistry no longer works – the closing of a leading Irish ad agency
5 What is at stake for Ireland in the new Brexit talks?
6 Digicel’s earnings rise as it looks towards refinancing $1.3bn of bonds
7 Can I see my father’s previous wills?
8 Ryanair and Aer Lingus monitor impact of coronavirus on travel to Italy
9 Fuel company loses €1.3m challenge over tax bill
10 Coronavirus leads United Airlines to withdraw profit forecast
Real news has value SUBSCRIBE