Bank's employees could see salary rises of up to 8% 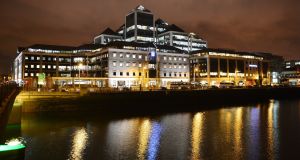 Ulster Bank has agreed a pay deal with staff that will involve average increases of close to 2 per cent for employees both sides of the Border.

The pay rises will take effect in April.

A majority of members of the Irish Bank Officials’ Association accepted the proposals last week following a recommendation from mediator Martin King on January 18th.

Depending on their performance rating, staff in both the Republic and Northern Ireland could achieve increases of up to 8 per cent, weighted towards the lowest-paid grades.

In addition, entry-level salaries for clerical staff have been increased.

These changes are backdated to January 1st.

“In line with our commitment to paying people fairly, I am pleased that we will increase entry salaries as well as performance-based increases for other employees, particularly for those at the middle and lower end of the salary ranges in the bank.”

IBOA general secretary Larry Broderick said the pay increases were a recognition of the contribution by staff in helping the bank back to profitability.

Ulster Bank reported an operating profit of €178 million for the first half of 2015, more than twice the level achieved for the same period of the previous year.

“In addition to the average increase of 2 per cent, the union has secured significant increases in the entry-level grades, in both the Republic and Northern Ireland, and this needs to be welcomed as a step in the right direction in addressing the lowest-paid workers in Ulster Bank,” Mr Broderick said.

This agreement follows the separation of the Ulster Bank businesses north and south of the Border by their parent company, Royal Bank of Scotland.

The Northern Ireland business reports into Britain while the bank in the Republic is a standalone entity with separate reporting lines into RBS.

This will be reflected in RBS’s annual results on February 26th when figures for the Republic will be broken out for the first time.