Thousands set to get refunds after collapse of Enterprise Insurance 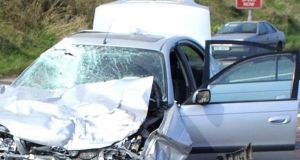 Wexford-based Wrightway Underwriting, which wrote business on behalf of Enterprise Insurance, the Gibraltar-based insurer that closed on Friday affecting 14,000 Irish drivers, said it will refund some premiums

An Irish insurance underwriting agency that wrote business on behalf of Enterprise Insurance, the Gibraltar-based insurer that ceased trading on Friday, said it would refund outstanding premiums as 14,000 Irish motorists were hit by the collapse.

Wexford-based Wrightway Underwriting entered into an agreement with Enterprise Insurance in 2014 to offer motor insurance in Ireland through the Irish company’s broker network. Wrightway is ultimately owned by Zurich Insurance.

“Wrightway has committed to helping its broker clients deal with affected policy-holders and, with this in mind, Wrightway has decided to make an ex gracia payment to its brokers to pass onto their policy holders which is equal to the value of the premiums from now until the end of their current policy contracts,” it said in a statement on Sunday.

A spokesman for Wrightway declined to say how much money was involved, other than it was a “significant” amount which would be funded by the company’s own resources.

He added that Wrightway executives were not available for further comment.

While the Gibraltar Financial Services Commission, Enterprise Insurance’s regulator, said that all policies are still in force and that customers do not need to take any action at this stage, the Irish Central Bank has advised affected motorists to seek alterative cover.

Indeed, a spokeswoman for the GFSC said the regulator did not know how long the policies would remain in place. With an interim liquidator set to be appointed to the insolvent insurer soon, it has “yet to be determined” how any shortfall in funds to cover existing and future claims on current policies would be covered, she said.

It also emerged over the weekend that the Central Bank in Dublin had asked the GFSC earlier this year to review the Irish motor business of Gibraltar-based firms, drawing attention to its report last year on rising insurance claims and costs.

Irish officials followed up on that letter with a visit to the GFSC on July 7th to reinforce the point, according to sources.

Enterprise Insurance also had businesses in France, Greece, Italy, Norway, and the UK. The Gibraltar authorities have indicated that they plan to pass the potential costs on to the compensation funds in the other countries.

This will drive up Irish motor insurance coverage as the costs will ultimately be borne by customers.

The collapse of Enterprise Insurance comes just two years after that of Malta-regulated Setanta Insurance, which only wrote business in Ireland, leaving €90 million of outstanding claims.

While it was initially expected that the State-run Insurance Compensation Fund would cover up to 65 per cent of Setanta claims, to a limit of €825,000 per claimant, the High Court and Court of Appeals have pushed the bill onto the Motor Insurers Bureau of Ireland, an industry-funded body that deals with claims against uninsured drivers. The bureau has been allowed appeal this to the Supreme Court.

Meanwhile, a Government-commissioned report recommended on Friday that third-party motor claims arising from the liquidation of an insurer should be met in full by the ICF, with the MIBI contributing 35 per cent.

“I am satisfied that, when implemented, these recommendations will provide greater certainty regarding the insurance compensation framework in Ireland. Importantly, for insured motorists this will facilitate speedier payments and a simplification of the claims procedure,” said Minister for Finance Michael Noonan on Friday. He noted, however, that the Setanta case remains subject to legal proceedings.