‘Somewhat unfair’ of FBD to tell pub it was covered for Covid-19 losses, court hears 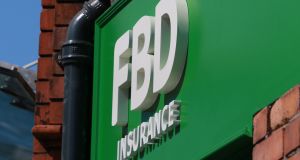 FBD’s chief of underwriting Kate Tobin was asked whether it was unfair of the insurer to tell Noel Anderson that FBD business disruption policy for pubs in early March covered the pandemic. Photograph: Nick Bradshaw

A senior executive with FBD has accepted it was “somewhat unfair” of the insurer to tell a publican his business was covered for losses caused by Covid-19, only to subsequently withdraw that cover some weeks later.

FBD’s chief of underwriting Kate Tobin was asked in the High Court by Michael Cush SC for the owners of the Dublin bar-restaurant Lemon & Duke whether it was unfair of the insurer to tell Noel Anderson that FBD business disruption policy for pubs in early March covered the pandemic.

Mr Anderson, whose partners in the business include Irish rugby players Seán O’Brien, brothers Dave and Rob Kearney, and Jamie Heaslip, has said he had specifically switched to FBD believing its policies covered coronavirus.

Mr Anderson said he was outraged upon being informed by FBD after businesses shut down last March the policy did not cover losses caused by the pandemic.

Under cross-examination by Mr Cush for the pub, Ms Tobin accepted the withdrawal of the cover, despite the previous assurance made to Mr Anderson, was “somewhat unfair”.

Ms Tobin, who gave evidence by video link, added she could understand why the decision could be seen to be unfair, and “not a great thing to have done”.

Mr Cush had asked Ms Tobin if the withdrawal of cover in relation to Mr Anderson’s business was an “unconscionable thing to do”, and if his reaction to FBD’s stance was “justified”.

In her witness statement, Ms Tobin said she was aware that Mr Anderson was sent an email in early March stating that FBD would cover Covid-19.

Her view of that email was that it was very “vague”.

Had it been brought to her attention when it was sent, she would have advised that it needed to be made clearer that business interruption cover would not extend to a general quarantine or the Government-mandated national lockdown.

In her evidence, she said FBD’s senior management looked at ways of supporting its customers, particularly after the lockdown.

A lot of the pubs, she said, were long-term customers, but she was of the view that business interruption cover caused by a general nationwide lockdown was not something publicans had contemplated when taking out cover under the insurer’s Public House Policy.

From the end of the second week of March, support measures, other than providing cover, were considered.

On March 18th, she said, FBD decided not to intervene in the normal processes by doing things such as making ex gratia payments to customers.

Ms Tobin was giving evidence before Mr Justice Denis McDonald during the second week of test cases brought by four pubs, arising out of FBD’s refusal to indemnify them for the disruption to their businesses due to Covid-19.

The actions have been taken by Dublin bars Aberken, trading as Sinnotts Bar; Hyper Trust Ltd, trading as the Leopardstown Inn and Inn on Hibernian Way Ltd trading as Lemon & Duke, and the owner of Sean’s Bar in Athlone, Co Westmeath.

They claim that under their policies of insurance taken out with FBD, they are entitled to have their consequential losses covered by what they claim is an insurable risk.

They also claim the insurer is in breach of contract.

The publicans claim the policies taken out with FBD have a clause that states the pubs will be indemnified if their premises were closed by order of the local or Government authority if there are “outbreaks of contagious or infectious diseases on the premises or within 25 miles of same”.

FBD disputes that claim and says the closures did not occur as a result of an outbreak of disease at the premises or areas where the pubs are located.

Evidence in the case has concluded and the court will now hear submissions from the parties, which is expected to take several days.

The action is expected to conclude next week.