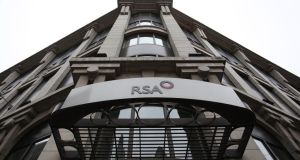 One analyst asked why Simon Lee’s resignation as group chief executive had been accepted, but the scandal created such difficulties for RSA, his position was probably untenable

Specifically, the finger of blame is being pointed at the three senior executives who were suspended by the company in dramatic circumstances on November 8th pending the outcome of PwC’s review into issues in the Irish claims and finance functions that were “identified during a routine internal audit”.

The trio stand accused of “inappropriate collaboration” that “undermined control effectiveness over claims”. Chairman Martin Scicluna said the issues were “isolated to Ireland” and did not reflect its governance elsewhere in the world.

RSA operates in 29 territories but its governance has been given the all-clear following an investigation by KPMG.

Philip Smith, the former chief executive of RSA Insurance Ireland, the country’s biggest insurer, resigned on November 28th claiming he had been made the “fall guy” for the problems that emerged at the business here.

RSA said yesterday that Rory O’Connor, the chief financial officer in Ireland, and claims director Peter Burke had been dismissed earlier this week for “their roles in relation to large loss and claims accounting irregularities”.

This followed an internal disciplinary process that ran in parallel with the PwC review.In relation to those three individuals, the matter is now closed as far as RSA is concerned.

However, many questions remain unanswered, and the Central Bank of Ireland, which regulates RSA Insurance Ireland, said it was “continuing to examine the issues . . . and will continue to liaise with RSA and other stakeholders”. The regulator said this could take “some months”.

RSA yesterday published a summary of the findings of the PwC report. PwC was charged with reviewing the Irish control failures and reserve issues. However, the insurer did not publish the report in full or even in a redacted format.

PwC reviewed the financial and regulatory reporting processes and controls within the Irish business, and the group’s oversight and controls of its subsidiary here.

Large loss claims
It identified some weaknesses in the local implementation of the large loss claims policy and financial control practices. PwC said there was “inappropriate accounting for net earned premium and pipeline earnings”.

PwC reviewed electronic documents of 60 individuals and identified “documentary evidence” to support the group board’s view that there had been “inappropriate collaboration involving a small number of senior executives in Ireland”.

The executives are said to have acted in a way that “intentionally circumvented parts of the existing control framework”.

“In particular, the large claim reserving policy was circumvented,” RSA said. “By so doing, financial records did not fully reflect the financial position of the business, and reports made to group and regional management were inaccurate and potentially misleading.”

The financial impact for RSA was total losses of about £200 million. These comprise £72 million arising from irregularities within the claims and finance functions. Of this amount, £37 million comes from “inappropriate collaboration” on large loss and claims accounting.

It is taking a hit of £128 million from the completion of an internal reserve review of the Irish business. Of this, £62 million relates to reserve strengthening for business written last year.

On a conference call with analysts yesterday, group chief financial officer Richard Houghton said the issues in Ireland were “complex and multilayered”. He said they related to increases in bodily injury claims, the rapid growth in its portfolio here, some “distortions” in reserving numbers due to “inappropriate management actions and weaker-than-desirable claims handling practices”.

Adrian Brown, who has been drafted in by RSA to run the Irish business on an interim basis, said questions began to be asked of the Irish reserves at the “back end of 2012”. This led to an independent reserve review being done, which came back “clear”, he added.

Resignation
One analyst asked why Simon Lee’s resignation in December as group chief executive had been accepted given that PwC concluded the group system of governance was “appropriate” for a company of its size and scale, and found that there was “no obvious” indication that the issues that came to light had been ignored at group level.

It was a fair question, although the scandal had created such difficulties for RSA and its share price that Lee’s position was probably untenable. The group is currently undertaking a review of its group capital position in light of the drain on resources placed on it by the Irish subsidiary.

Speculation that Smith might issue a statement yesterday proved to be unfounded. For now at least, he is saying nothing.

Similarly, O’Connor and Burke, who are believed to have co-operated with the investigations, have made no public comment. Their reputations have unquestionably been tarnished. It will be interesting to see if they pursue any litigation against RSA or decide to move on with their lives.

The spotlight might yet fall on Deloitte’s Irish operation, which acted as auditor to the business here until May 2013. In response to a question about whether RSA might sue Deloitte for negligence, Mr Houghton said the “board was taking appropriate external advice on the issue”.

Deloitte in Ireland declined to comment on its work with RSA.

What is clear is that this debacle is an unwelcome setback for the reputation of Ireland’s financial sector at a time when it seemed to be putting its woes behind it.

1 How much state pension will I get next year?
2 How long can Government afford to keep State pension age at 66?
3 Am I crazy to consider switching to an Ulster Bank mortgage?
4 PTSB plays down Ulster Bank talk as it sells €1.4bn of loans
5 EU bank watchdog may need to revisit payment breaks
6 Housing crisis here to stay in absence of big rethink, industry warns
7 Irish tech company Asavie acquired by Nasdaq-listed Akamai
8 Avolon appoints Paul Geaney as chief risk officer
9 Brexit to curb services trade with UK, accountants group warns
10 Up or down – how much is your Local Property Tax this year?
Real news has value SUBSCRIBE