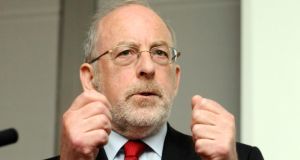 An affidavit filed on Sunday by the Central Bank, as well as a separate internal report last week to governor Patrick Honohan, outline a litany of alleged regulatory breaches over several years by Newbridge Credit Union (NCU).

Those alleged breaches, the Central Bank contends, led to it being swallowed by Permanent TSB at a cost to the taxpayer of €54 million. The regulator considers itself powerless, however, to instigate enforcement action against the directors and managers for these alleged breaches.

Prior to August of this year, when new rules came into place, the Central Bank’s regulations on financial probity for the directors and managers of financial institutions did not apply to credit unions.

Nor did it have any powers to directly sanction credit union directors or managers for rule breaches.

Since August 1st, all credit union directors have to fulfil the industry-wide financial probity rules.

If any of the NCU directors are nominated to the boards of other credit unions in future, the Central Bank would be entitled to investigate their past behaviour.

The sanctions that came in on August 1st for credit union directors and managers found to have breached rules include financial penalties, disqualification as directors and directions to pay the costs of cases and investigations.

These can all be appealed to the Irish Financial Services Appeals Tribunal.

Enforcement action, however, cannot be taken retrospectively. So any alleged breaches before August 1st cannot be punished.


NCU to be liquidated
While the assets and liabilities of NCU have been transferred to PTSB, the credit union entity remains and will be put into liquidation by the Central Bank in coming days.

Its only asset is the NCU building in Newbridge, valued at €3.9 million.

It has liabilities of some €54 million, the cost to the State of plugging the hole in the accounts, so is insolvent.

With an insolvent company, a liquidator has the right under the Company Law Enforcement Act to take action if he spots any alleged breaches of the Companies Acts.

If a liquidator identifies any alleged breaches, he can make a referral to the Office of Director of Corporate Enforcement, and ask it to investigate.

No allegations of breaches of the Companies Acts have been made against any director or senior manager of the credit union.

The manager of NCU during the period of its involvement with the Central Bank this week had his employment contract transferred to PTSB.

1 Michael Smurfit: ‘I asked Trump to invite me to the White House for my 80th birthday’
2 ‘I’m so lucky to be in the Caribbean – a million miles from Derry Girls’
3 Small businesses are cannon fodder in zealous anti-virus experiment
4 Ryanair expects air fares to fall when flights take off again
5 ‘Never mind GDP; the most fundamental job of any leader is to keep his people alive’
6 Irish business of Carluccio’s restaurants to be wound up
7 Ireland stands to benefit in a big way from investing in public transport
8 Tax and the Pandemic Unemployment Payment: Your questions answered
9 Coronavirus: Technopath offers employers not-for-profit antibody tests
10 Household savings soar as consumers stop spending
Real news has value SUBSCRIBE