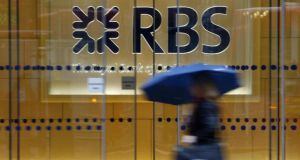 RBS is preparing to sweep away a litany of past problems with a plan to clear out bad loans, overhaul business lending and refocus on its UK retail and commercial business. Photograph: Johnny Green/PA Wire

The Irish banking sector faces further turmoil as it emerged last night that Royal Bank of Scotland, owner of Ulster Bank, is planning to put much of its Irish business into an internally managed “bad” bank.

The news will increase fears that the bank may be intending to withdraw from or radically downsize its involvement in the Republic, where it is the third largest bank after Bank of Ireland and AIB.

The development comes after yesterday’s announcement by Danske Bank that it is to close its business and personal banking operations here, with the loss of 150 jobs. Coming just a week after ACCBank said it was to hand back its banking licence next year with the loss of about 180 jobs, it has raised fears about competitiveness in the sector and lending to SMEs.

Last night it emerged that RBS is preparing to sweep away a litany of past problems with a plan to clear out bad loans, overhaul business lending and refocus on its UK retail and commercial business.

Riskiest assets
The bank, which collapsed in 2008 and is still 81 per cent owned by the British state, is to siphon off tens of billions of pounds of its riskiest assets – including Irish property and commercial real estate loans – into a “bad” bank in an attempt to pave the way for a return to private ownership.

Ross McEwan, the chief executive who took over in late September, is expected to return RBS’s UK retail and business to the heart of its operations. The bank is likely to pull back from overseas operations and accelerate plans to sell its US arm, Citizens. Bankers also expect a significant shrinking of RBS’s investment banking arm. “It will be a cathartic day for RBS,” said one person close to the bank.

Shake-up
The shake-up follows a four-month review by Rothschild and BlackRock, commissioned by George Osborne, UK chancellor. It also coincides with a critical report of RBS’s small business lendingby Sir Andrew Large, former deputy governor of the Bank of England.

Mr Osborne will claim the overhaul of RBS represents a “fresh start” for the bank and a decisive moment on its journey back to the private sector.

RBS is due to publish its third-quarter results, which are expected to show a pre-tax profit of about £440 million, compared with a £1.3 billion loss a year earlier when the bank suffered a big hit from a revaluation of its own credit. (Additional reporting: Financial Times Limited)