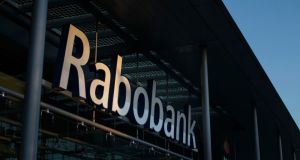 US and European regulators have ordered Dutch lender Rabobank to pay €774 million ($1.07 billion) in penalties over the Libor scandal. Photographer: Jasper Juinen/Bloomberg.

US and European regulators have ordered Dutch lender Rabobank to pay €774 million ($1.07 billion) to settle allegations that it aided a scheme to rig benchmark interest rates.

It is the fifth fine imposed in a scandal that has helped to shred faith in the financial industry.

Rabobank announced the fine today after US, British and Dutch regulators deemed 30 employees were involved in “inappropriate conduct” linked to manipulation of rates such as Libor (London Interbank Offered Rate) and its Euribor cousin, benchmarks for more than $300 trillion of financial products.

Rabobank is the parent bank of Irish operator ACC.

Announcing his early retirement, Rabobank’s chief executive Piet Moerland said he was shocked by the language used by former and current employees, and fully understood the sense of indignation that this would cause internally and externally.

“Such behaviour is entirely contrary to our core values, of which integrity is the most important,” he said. “The public has to be able to trust that Rabobank employees operate with our core values in mind.”

The scandal surrounding interbank rates that oil the wheels of global finance has already prompted authorities to fine four institutions a total of $2.7 billion. They have also charged seven men with criminal offences amid a sprawling, global inquiry that has laid bare the failings of regulators and bank bosses.

Political and public outcry has been stoked partly because of industry gripes about tough new regulations to rein in excessive risk-taking and greed, about five years after the world’s financial system buckled and forced taxpayers to fund huge bank bailouts.

But the size of the fine imposed on Rabobank - a cooperative that finances Dutch cheese and tulip producers and abolished executive board member bonuses in October - sends a stark message to institutions such as Germany’s Deutsche Bank, which have yet to reach regulatory settlements.

It is the second largest penalty to date and bigger than initially expected as banks also set aside billions of euros to cover civil litigation costs from disgruntled clients who allege they were short-changed by their banks by the scam.