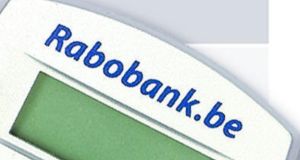 Rabobank, the Dutch co-operative banking group which operates in Ireland, reported a 20 per cent rise in 2015 net profit on Thursday to €2.21 billion in a rebounding Dutch economy.

The dominating factor was a fall in loan provisions of more than €1 billion, to €343 million, though Rabobank said that low level would probably not be maintained in 2016.

Rabobank in December announced plans to shed 9,000 jobs, a fifth of its workforce, and sell as much as €150 billion worth of assets on its balance sheet by 2020 to make itself more resilient to financial shocks.

Chief executive Wiebe Draijer said the bank would press ahead with those plans, having completed a change to its corporate structure in which co-operation members have been made legally subordinate to the head office in Utrecht.

Rabobank echoed remarks made by rival ABN Amro in its earnings report on Wednesday that, despite a Dutch economy forecast to grow by at least 2 per cent in 2016, businesses in the Netherlands were not taking new loans.

1 How can I view my dead brother’s will if I’m not the executor?
2 Galway development could transform skyline with 21-storey tower
3 Russian oligarch tees up €85m sale of Dublin’s Morrison Hotel
4 Just 8,000 houses built last year offered for sale on open market, says CIF
5 Only a quarter of Irish firms confident about cybersecurity
6 Google users in UK to lose EU data protection, sources say
7 Ryanair appeals over its failed defamation action against pilots
8 Bursting of Tesla bubble a case of ‘not if, but when’
9 Publicans, builders and restaurateurs make peace with the Revenue
10 Walmart disappoints with weak sales volumes over Christmas
Real news has value SUBSCRIBE