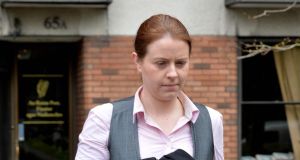 In an affidavit, Aoife Quinn said 16 recordings recently disclosed to the Quinns, covered a period from July to September 2008. Photograph: David Sleator

Recordings of conversations involving senior executives of Anglo Irish Bank include a recording of a conversation indicating there was a 2 per cent limit for lending to shareholders of the bank, not 25 per cent, the Quinn family have told the Commercial Court.

In an affidavit, Aoife Quinn said 16 recordings recently disclosed to the Quinns, covered a period from July to September 2008. They revealed “very significant and worrying facts” about the involvement, unknown to the Quinns, of new individuals concerning the restructuring of Anglo and other matters, and new conversations “of significant import”.

This newly discovered material was “fundamental” to the Quinns' case denying liability for some €2.34 billion loans made by Anglo to Quinn companies. The family claim the loans were made illegally to prop up Anglo’s plummeting share price. They have subsequently brought an application to strike out the defence put forward by Irish Bank Resolution Corporation – which took over Anglo – on the basis it failed to make proper discovery of documents necessary for their action.

The family were concerned large numbers of relevant documents had still not been discovered to them almost two years after a discovery order was made, she said.

From a total of 130,000 recordings of conversations involving Anglo executives and others, IBRC had only discovered nine audio recordings for the period between September to December 2007. Some 278 recordings in all, or 0.2 per cent of the total, had been disclosed to the Quinns covering the relevant period.

Martin Hayden SC, for the Quinns, said yesterday the strike-out application could be adjourned on consent of the sides to October to allow Anglo file a replying affidavit to Ms Quinn and, if necessary, for her to respond to that.

Paul Anthony McDermott BL, for the Director of Public Prosecutions said the director is concerned to ensure any publication of recordings exhibited in the Quinns’ civil proceedings should not prejudice pending criminal proceedings but the DPP was not seeking a formal order at this point.