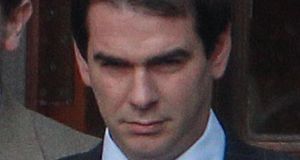 jnr is offering to provide €75,000 towards purging his contempt of court orders restraining stripping of assets from the Quinn family’s international property group, the High Court has heard.

Sean Quinn jnr had previously indicated he may sell the home in Castleknock, Dublin, he shares with his wife Karen Woods as part of his efforts to purge contempt but the court later heard he wants to advance an alternative proposal. His father-in-law Pat Woods has offered to assist him by providing him with €75,000.

Mr Quinn was found guilty of contempt in June 2012 by Ms Justice Elizabeth Dunne after she found he was involved in a $500,000 payment from Quinn Properties Ukraine (QPU) to Larissa Puga, former general director of QPU, around the time of the takeover of that firm by Irish Bank Resolution Corporation. He had denied any involvement in that payment.

The judge adjourned the matter to June 11th when she will consider whether Mr Quinn’s proposals are sufficient to purge his contempt.