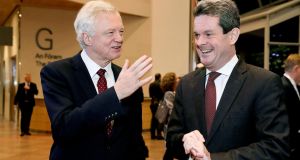 Mr Davis was speaking at the professional services company’s 2018 “fit for growth” business forum alongside Pippa Malmgren, a former economic and policy assistant for US president George Bush.

The speech, in the Convention Centre Dublin, was organised through the London Speaker Bureau which also acts for Mr Davis’s successor Dominic Raab. It was not open to journalists due to a stipulation in Mr Davis’s contract which also precluded recordings of the event, sources close to PwC said.

Mr Davis’s speech to PwC took up about 12 hours of his time, parliamentary returns in the UK show, including preparation, travel and attendance. In the same set of returns, Mr Davis disclosed two other speeches for which he also charged £16,000. They were given to investment management group Brewin Dolphin and business advisory group FTI Consulting, which also has a presence in Dublin.

A spokesman for PwC said: “The vast majority of the time, someone speaking at PwC doesn’t get paid money,” adding that the Davis payment was “not an abnormal fee for someone of that pedigree and profile”.

“Whether you like him or not, he is a former cabinet secretary,” the spokesman said.

The MP for Haltemprice and Howden in the northeast of England also disclosed that he had taken up a one-year role as an external adviser to equipment manufacturer JCB. The former Brexit secretary is being paid £60,000 a year, paid quarterly, for his consultancy role which will take up some 20 hours a year. The fee equates to £3,000 an hour.

Since he resigned his role as Brexit minister, Mr Davis has been paid £96,000 for part-time roles. This does not include funds received for his speaking engagements.

Asked whether Mr Davis’s speaking engagement causes a conflict of interest with regard to PwC’s advisory work on Brexit, the company’s spokesman said it didn’t, noting that the company tries to “understand both sides of the argument and [to] advise our client what’s right for them”.

Mr Davis’s former cabinet colleague Boris Johnson has also done well since resigning his role as a UK minister. The London-based MP received £22,916 a month for his Daily Telegraph column. On the speaking circuit, former foreign secretary Mr Johnson commanded a higher fee than Mr Davis, reporting £28,900 for a speech in December.

More recently, Mr Johnson spoke at the Pendulum Summit in Dublin, although any fee he may have received for that engagement has yet to be disclosed.