A seize up in credit markets could cause shocks, Jes Staley said 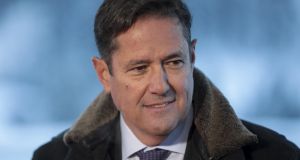 Barclays’ top banker said it’s “more than likely” there will be another financial crisis, but his industry is unlikely to be the trigger this time.

Instead, chief executive Jes Staley said he sees potential shocks from a seize-up in credit markets, given where risk in the system has gone since banks shrank their balance sheets. A hard Brexit is another risk.

“This time, there’s a chance the banks will be the buffer, as opposed to the cause” of the crisis, Mr Staley, who has been the British bank’s chief executive since 2015, said in a Bloomberg Television interview from the World Economic Forum in Davos, Switzerland.

He cited the flow of credit into collateralized loan obligations, and also pointed to the lack of high-yield debt issuance in December. “If that had extended into the first quarter, that itself would have created a potential credit shock,” he said. “There were a lot of companies that need to roll them over.”

As well, “there is an extremely high amount of debt in sovereign balance sheet” on the back of historically low interest rates, he said.

This year’s Davos is abuzz with discussion about European bank mergers, but Mr Staley poured cold water on the idea as a panacea for the industry. While banks’ financial strength is much improved from the last crisis, share prices swooned last year amid a mediocre outlook for earnings, and German policy makers are said to be discussing the merits of a tie-up between Deutsche Bank and Commerzbank.

Investment bank mergers “do not work,” said Mr Staley, a former senior executive at JPMorgan Chase. He cited JPMorgan’s crisis-era deal to acquire Bear Stearns. “I was there.” Dealmaking takes banks’ focus away from focusing on technological innovation, he said.

Mr Staley said Barclays is already big enough to compete with the big Wall Street firms and that he’s confident in the bank’s strategy. His strategy to build the investment bank has been under attack by Edward Bramson, an activist investor who holds more than 5 per cent of Barclays. – Bloomberg