PTSB offers rehearsed response and paltry amends to the wronged 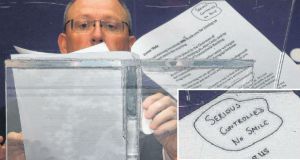 Jeremy Masding, chief executive of Permanent TSB, at a press conference in Dublin yesterday after a Central Bank investigation revealed that serious failures by PTSB led to people losing their homes. At the top of Mr Masding’s speech is a handwritten note (inset) that says: ‘Serious, controlled, no smile.’ Photograph: Brian Lawless/PA 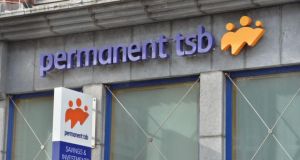 Some 1,372 accounts were affected between PTSB and its then subsidiary Springboard Mortgages. Photograph: The Irish Times

Here we go again. Yet another banking scandal but this time it can’t be blamed entirely on the shabby practices of the pre-crash era.

The holders of at least 22 Permanent TSB mortgage accounts – the figure could be as high as 61 – have lost properties since 2011 as a result of a “failure” by the bank to inform them that they could have availed of a cheaper tracker interest rate to which they were entitled in the years from 2006.

Instead, they were put on more expensive variable rates. The cost of that error was magnified by the financial crash in late 2008, after which Irish banks jacked up their variable rates to offset losses on trackers, which declined in parallel with reductions in the European Central Bank’s rate.

Some 1,372 accounts were affected in total between PTSB and its then subsidiary Springboard Mortgages. Many of these were simply overcharged on their interest rate, some were pushed into arrears and others were dragged through the courts.

Yesterday, the State-controlled bank offered those who have lost their homes a miserable €50,000 in compensation and €25,000 if it was a buy-to-let property. Some 10 PTSB account- holders lost their primary residence and 12 an investment property, according to the bank.

It is also offering to write off the debt still owing on the properties and compensation from “any uplift in property values since the loss of ownership occurred”. It will also “support” these customers in future mortgage applications.

According to Niall O’Grady, director of transactional banking, savings and investments at PTSB, the bank wants these customers to be “in a position that they would have been in if this failure had not taken place”.

This cannot happen for the people who have lost their homes. There’s no turning back the clock on that tragedy in their lives.

The financial compensation is paltry when you consider the stresses and strains that these people must have endured. They have lost their homes and by extension their dignity. They’ve also had their credit records destroyed by a State-owned bank.

At a press conference yesterday, PTSB chief executive Jeremy Masding didn’t have the words to describe how this made him feel.

Masding took over PTSB in January 2012. In his own words, the bank had “major problems” and was “badly broken” before his time. Its “standards fell well short” of what was expected.

Masding said accountability and responsibility have been “core values” at PTSB since he took charge. “When mistakes are made we put them right,” he told the media.

And yet it took an enforcement investigation by the Central Bank in the middle of last year to give the bank pause for thought on this matter.

It wasn’t when the Financial Services Ombudsman found against the bank following complaints from a number of account holders, or when the High Court upheld the FSO’s ruling in August 2012.

At that time, the bank pressed on with a Supreme Court appeal against four customers who held two mortgages between them.

This was withdrawn only in February of this year. These trips through the courts happened on Masding’s watch, with the support of his board, and created untold stress for the customers involved.

Why it was only on the intervention of the Central Bank last year that PTSB decided to do its “scoping exercise” to determine if there was a case for the bank to answer and to try to calculate how many customers might be affected?

According to David Hall of the Irish Mortgage Holders’ Organisation, there is also much anger among the accountholders affected over PTSB’s decision to announce this yesterday to the media, before it had written to the customers involved.

This presumably revolves around the bank’s desire to control the message rather than have it leaked piecemeal into the public by the account-holders.

Masding had prepared answers for practically all the questions asked of him yesterday by the media. His opening script had three reminders scribbled in the top right hand corner: “serious, controlled, no smile”. This announcement was carefully rehearsed.

The other people who are entitled to be outraged by PTSB’s actions are taxpayers, who gave the bank a €2.7 billion bailout in 2011.

PTSB now faces fines from the Central Bank of up to €20 million while the compensation payments to customers will cost it a minimum €35 million. This is largely taxpayers’ money, given that the State still owns 75 per cent of the bank.

Ironically, PTSB’s share price rose in Dublin yesterday by 2.7 per cent. This no doubt reflected the fact that its interim results, which were rushed out a day early, showed that the group had reported an underlying profit of €1 million.

The share price spike was based on hard numbers rather than the human cost of the bank’s actions. Much like how PTSB went about its business when it came to this “customer cohort” of 1,372 people. Twitter: @CiaranHancock1