Proceeds from 103 Tyrrelstown houses for fund and developer 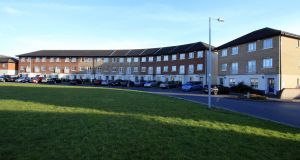 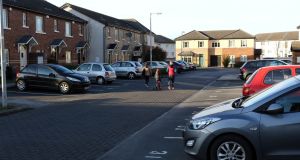 Cruise Park Drive, Tyrrelstown: A meeting of residents affected took place on Monday night, with local politicians being told of fears over the difficulties they will face finding new accommodation in the area. Photograph: Nick Bradshaw

The cash generated by the sale of 103 houses in Tyrrelstown in west Dublin will be split between a Goldman Sachs fund and a company linked to the property developer Twinlite.

Rick Larkin, a director of Twinlite, also confirmed that his family is the beneficial owners of European Property Fund (EPF), the company that owns the houses and took the decision to sell them and ask the residents to leave properties including houses on Cruise Park Drive.

A meeting of residents affected took place last night, with local politicians being told of fears over the difficulties they will face finding new accommodation in the area.

Goldman bought the Twinlite loans in 2014 from Ulster Bank, which originally lent the cash to build the houses. Mr Larkin denied the recent decision to sell the houses and ask tenants to vacate was taken as part of an agreement with Beltany.

Mr Larkin said there would probably also be “some equity” for Twinlite, and it might also receive some payment after the Beltany loans are paid off.

The developer insisted on RTÉ Radio yesterday that there were “no backroom deals” with Beltany to sell the houses and evict the tenants.

Companies office records show, however, that on November 25th, 2015, a restructuring deal was completed between the Goldman fund, Twinlite, EPF, and several other parties. The deal was signed by Mr Larkin.

Immediately following this deal, the records show that Beltany released a number of charges – similar to mortgages – that it held over the Tyrrelstown houses that are being sold.

Mr Larkin told The Irish Times this restructuring was because it refinanced its loans with Goldman Sachs in November, which essentially means Goldman rolled over the loans and extended them.

When asked to confirm that the Larkin family were also the ultimate owners of EPF – effectively, that they sold the Tyrrelstown houses to themselves – he confirmed this was the case.

When asked why he did not make the Larkins’ ownership of EPF clear in his statements yesterday, he said: “Nobody asked me the question until you did just now.”

Mr Larkin again stressed that this was not the case, and said EPF planned to sell them anyway, even before it did its refinancing deal with Beltany.

He also said, “we are seeking an investor to buy all of the houses together”.

If an institutional investor were to buy all of the houses, it is possible the buyer could elect to keep on the tenants.