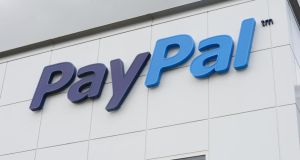 Paypal’s lending programme could prove critical as the company spins off next year from parent eBay, to compete in an increasingly crowded payments-processing industry. (Photograph: Alan Betson / THE IRISH TIMES)

PayPal is pushing to expand into the alternative lending market popularised by faster growing start-ups such as Lending Club, after already advancing more than $200m of loans to consumers and small businesses.

Paypal’s lending programme is far more modest than market leaders such as Lending Club and OnDeck. But executives say they are putting more effort behind the programme and it could prove critical as the company spins off next year from parent eBay, to compete in an increasingly crowded payments-processing industry.

Non-bank lending has grown rapidly in recent years, as traditional banks have pulled back and a host of start-ups have raced to fill the gap with new business models. Peer-to-peer group Lending Club has helped third-party investors make more than $6bn in loans through its platform and was valued at $8.9bn after its initial public offering last week.

“It’s just scratching the surface of what we see as the opportunity there,” said Steve Allocca, Paypal’s head of credit. “This has never been a space that’s been particularly well served by banks or traditional lenders.”

Paypal’s merchant lending programme launched last September and has since made more than 35,000 loans at a maximum of $60,000. The company calculates risk based on the data it already has about merchants’ revenue and collects its money from the sales it then processes. Merchants pay a fixed fee for the money rather than an interest rate.

The move is likely to worry some senior bankers, who are concerned about being bypassed by the arrival of new technology savvy lenders.

“They do have a pretty strong brand, a decent critical mass of users, and if they can bridge that with a little bit better tech they could be very powerful”- Sanjay Sakhrani, analyst with brokerage Keefe, Bruyette & Woods

PayPal also operates a longer-standing consumer lending programme, and earlier this year announced it would spend about $1bn to buy an outstanding loan portfolio from GE Capital, with which PayPal offers a credit card. Buying the loans would help PayPal “expand its credit offerings”, it said at the time.

However, unlike alternative lenders such as Lending Club or small business-focused Kabbage, PayPal does not look to make money on the lending itself. Rather, it is a way for PayPal to give consumers and merchants an additional reason to use PayPal over rival payment processors, says Hill Ferguson, the company’s chief product officer.

PayPal faces challenges as it prepares for life on its own, analysts say. It handled $180bn of payments last year, more than newer rival processors such as Stripe and WePay, but analysts and its own executives say its older systems make it difficult for the company to innovate quickly in areas such as mobile commerce.

As a result, some newer start-ups have bypassed PayPal. So too did Apple, which tapped Stripe instead as one of its partners for launching its new mobile Apple Pay service.

“They do have a pretty strong brand, a decent critical mass of users, and if they can bridge that with a little bit better tech they could be very powerful,” said Sanjay Sakhrani, an analyst with brokerage Keefe, Bruyette & Woods.

The consumer part of its credit business also saves PayPal money. When shoppers link credit cards to their PayPal accounts, PayPal must pay fees to the card companies, but it does not pay those fees when consumers use credit from PayPal itself. PayPal passes some but not all of those savings on to its merchants, who pay PayPal for using its service, said Mr Ferguson and others.