Noonan says Government is not rushing to sell AIB 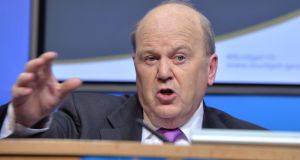 The Government is not “rushing” into selling AIB but there is the possibility of a sale of some of the bank at the end of next year or in the course of 2016, Minister for Finance, Michael Noonan, has told the Dáil.

Mr Noonan said he believed “the taxpayer will get all their money back in due course” but it was difficult to say over what period of time. The State rescued the bank with a €20.8 billion bailout and owns 99.8 per cent of the bank.

The National Pension Reserve Fund last year estimated the bank’s worth at more than €11.6 billion and its position has improved since then, the Minister said.

He told Fianna Fáil finance spokesman Michael McGrath that “things are going quite well for AIB”.

“It’s hard to say what exactly it is worth, but I believe, the same as the CEO of the bank, that the taxpayer will get all their money back in due course.”

Mr Noonan said there was the possibility of a sale “sometime towards the back end of 2015 or in the course of 2016 but we don’t have an agreed timeline”.

Mr McGrath said he was glad the Minister was not rushing into the sale of AIB. The Cork South-Central TD added he would not oppose selling a minority stake in the bank but added: “I do believe there is real long-term value for the State in holding some equity in AIB. It is a recovering bank in a recovering economy.”

The Minister said, “We’re doing the preparatory work now, we have a valuation on the bank but the real valuation will be after some shares have been sold.”

Mr Noonan said the process would involve the appointment of an “adviser”, and a reconfiguration of the bank’s shares, while also dealing with issues such as the State’s preference shares and contingent convertible capital notes.

He said it was the Government’s intention to use money from the sale of AIB to pay down debt, “but if it goes to 2016 it will be for the Government in 2016, whoever composes it, to make the decisions”.

In comments on the outlook for 2015, stockbroker Davy has meanwhile speculated that both AIB and Permanent TSB, which is 99.2 per cent owned by the State and has announced its intention to seek private capital to plug a shortfall identified in recent stress tests by the European Central Bank, could both be “back on the [main stock] exchange by the end of next year”.

AIB declined to comment on Mr Noonan’s remarks in the Dáil.

1 Lahinch Golf Club runs out of its own cash after €3m Covid-19 hit
2 Son putting elderly dad under pressure to sign over land
3 Fiona Reddan: Who’s afraid of Revolut? Not AIB and BOI it seems
4 Healthcare start-up by Netwatch founders helps elderly stay living independently
5 Ireland’s data law enforcement criticised as EU becomes ‘laughing stock’
6 Pfizer’s Upjohn spin-off completes merger with Mylan to form Viatris
7 Roll up, roll up: capitalism will drive cannabis legalisation in Ireland
8 How Tony Buzan used mind maps to doodle his way to millions
9 How much can Ireland borrow to get through this Covid-19 emergency?
10 Apple and Samsung announce unthinkable partnership
Real news has value SUBSCRIBE