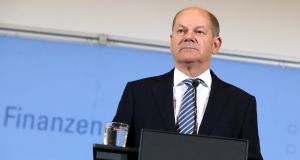 Olaf Scholz on European banking union: ‘We are only halfway through this project’. Photograph: EPA

A proposal from Germany’s finance minister to speed up the EU’s banking union project is likely to meet strong Irish opposition because it would include harmonising the taxation of banks.

“Tax law still distorts competition within the EU,” he wrote in an opinion article in the Financial Times on Wednesday. “This is why Germany, together with France, is calling for the adoption of a common corporate tax base and a minimum effective tax. Progress with banking union must not lead to competition-distorting tax arrangements. We need uniform taxation of banks in the EU.”

For consumers, Olaf Scholz has proposed the creation of a European-wide deposit insurance scheme as a backstop to national schemes, as he seeks to accelerate the banking union project.

Mr Scholz admits that his “reinsurance” proposal will come as a surprise from a German minister, as Berlin has been suspicious of Europeanising elements of banking and monetary supervision, suspecting that these may become vehicles for subsidisation of less financially responsible member states. The fund would be administered by the Single Resolution Board, the EU rescue fund.

The proposal, however, should reanimate discussions on a stalled debate on a European deposit insurance scheme (EDIS), which has been going nowhere.

A German briefing paper argues: “In the course of deeper market integration, the varying capacities of the national deposit guarantee schemes (NDGSs) could be balanced out within a European reinsurance scheme. To this end – once the target level set out in the EU Deposit Guarantee Schemes Directive has been achieved, and on the basis of an intergovernmental agreement – resources would be accumulated in a European deposit insurance fund in addition to the NDGS resources.”

Much has been done, Mr Sholz argues, but he says more needs to be done to complete banking union.

“We have already accomplished some important steps,” he writes. “We have established single European supervisory bodies and significantly increased capital levels. We have also set up a framework to restructure failing systemically important banks without endangering financial stability or having to use public funds.

“However, we are only halfway through this project. European financial markets are still fragmented, and barriers to the free flow of capital and financial liquidity still exist. We have discussed these issues intensively in recent years, to no avail. Now it is time to put together a package to complete the banking union.”