Concern over Cerberus Capital Management, which paid in region of €1.3bn for portfolio 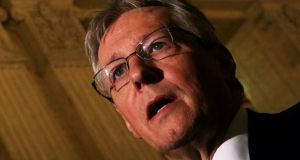 Former Nama debtors in Northern Ireland are being treated “less than sympathetically” by the US-based investment firm that bought their loans, British MPs have been told.

In a major report on the North’s banking, the House of Commons’ Northern Irish Affairs Committee complains about the lack of commercial lending by banks in the North, repeated IT failures and a drive to close rural branches.

Northern Ireland property loans held by Nama and worth £3.5 billion to £4 billion (€4.9 billion to €5.6 billion), were sold to Cerberus Capital Management last April “for around £1.3 billion”, a sale described at the time by First Minister Peter Robinson as “excellent news”.

“However, since our meeting with Cerberus,” the MPs said, “we have heard disquieting stories from some businesses in NI that they are being treated by Cerberus in a less than sympathetic manner.”

Property prices remain “a cause for concern”, the MPs said, adding that the warning from accountancy firm PwC that it could take another decade for prices to return to pre-crash levels made “for sobering reading”.

All of the banks should draw up a clear standard to identify new lending, or else face one imposed upon them by the Treasury, which should come into force next month.

Even though MPs acknowledged that technology is changing banking habits, they complained that Northern banks “have shown relatively little concern for their customers by their plans to close branches in small towns”.

Highly critical of the banks’ IT systems, MPs said it is clear that most are not fit for purpose and should be rapidly upgraded now that the banks are back into profit.

The inquiry into the collapse in Ulster Bank should be published without any further delay by the bank or the Financial Conduct Authority, the committee said.