Most buy-to-let investors in arrears on trackers, study finds 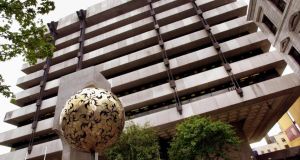 A study by the Central Bank found 70 per cent of mortgage arrears of 90 days or more in the buy-to-let sector – which equates to about €8.7 billion – were linked to cheaper tracker products, which are tied to ECB interest rates. Photograph: Matt Kavanagh

More than two-thirds of long-term mortgage arrears in the buy-to-let sector stem from cheap tracker loans rather than high-cost variable-rate mortgages.

The finding, contained in a study by the Central Bank, is likely to reignite concern that a significant portion of property investors are strategically defaulting on their mortgage loans in hope of gaining concessions from lenders.

The study found that 70 per cent of mortgage arrears of 90 days or more in the buy-to-let sector - which equates to about €8.7 billion – were linked to cheaper tracker products, which are tied to European Central Bank interest rates.

Since the financial crisis first hit, these rates have fallen from 4 per cent to an all-time low of 0.25 per cent, in theory making it a lot easier for tracker holders to service their debt.

In addition, buy-to-let landlords, particularly in the urban areas of Dublin and Cork, have benefited from a recent upward shift in rents.

The study – entitled Analysing Mortgage Arrears with Aggregated and Granular Data – found that in contrast to the buy-to-let sector, variable-rate holders, who have been hit by a sequence of rate rises, account for the lion’s share of arrears related to principal dwellings.

The study, presented at a conference hosted by the Central Bank in Dublin yesterday, provides one of most detailed assessments of the mortgage arrears problem in the Republic.

In contrast, for Spain, the EU country with the next highest level of arrears, the equivalent share was 7.5 per cent at the end of last year. The research indicated that while the growth in mortgage arrears stabilised at the end of last year, those in the longer-term arrears group, in excess of two years behind in their repayments, continues to grow. “While improvement in the overall arrears situation is to be welcomed, the persistent increases in very long-term cases remain a cause for concern.”

The research also provided a breakdown in the distribution of arrears by loan origination, geographic location of borrower and loan-to- value (LTV).

It showed mortgages taken out between 2004 and 2008, when credit rules were at their most lax, make up the large share of mortgages currently in longer-term or very-long terms arrears.

The distribution of arrears on a geographical basis indicated the Border and the midlands regions had a higher proportion of long-term arrears cases than other regions.

Additionally, the west had a relatively high proportion of buy-to-let loans in arrears of more than 360 days.

In contrast, Dublin and the southwest had the lowest relative proportions of principal dwelling and buy-to-let related arrears.

Well-off retirees
A separate study – entitled Deleveraging in a Highly Indebted Property Market – found well-off retirees in Ireland had been better at reducing their debt burden in the wake of the crash.

Several contributors from the floor wondered if this was down to lump-sum retirement payouts linked to the downsizing of the public sector.

As a consequence, the study said certain less well-off sections of the mortgaged population were likely to remain significantly indebted as they remain unable to address “their leveraged position”.