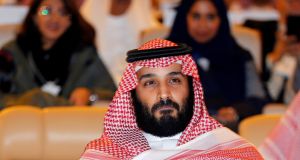 The chief executives of HSBC, Standard Chartered and Credit Suisse have pulled out of a high profile conference in Saudi Arabia next week, the latest business leaders to abandon the event amid widespread concern about the fate of a journalist.

Tidjane Thiam, the chief executive of Credit Suisse, has likewise dropped plans to travel to the October 23rd-25th event amidst uproar over the disappearance of Saudi journalist Jamal Khashoggi, a source familiar with the situation told Reuters.

Executives from the media and technology industries had already withdrawn from the event after the disappearance of Khashoggi.

Khashoggi, a US resident and Washington Post columnist critical of Riyadh’s policies disappeared on October 2nd after entering the Saudi consulate in Istanbul.

Turkey believes he was murdered and his body removed. Saudi Arabia has so far denied that, but American news outlets have reported the country is now preparing to acknowledge Khashoggi’s death in a botched interrogation.

US secretary of state Mike Pompeo arrived in Riyadh on Tuesday to discuss the case, which has strained US ties with Riyadh, carefully cultivated by US president Donald Trump. Trump has speculated “rogue killers” may be responsible. – Reuters